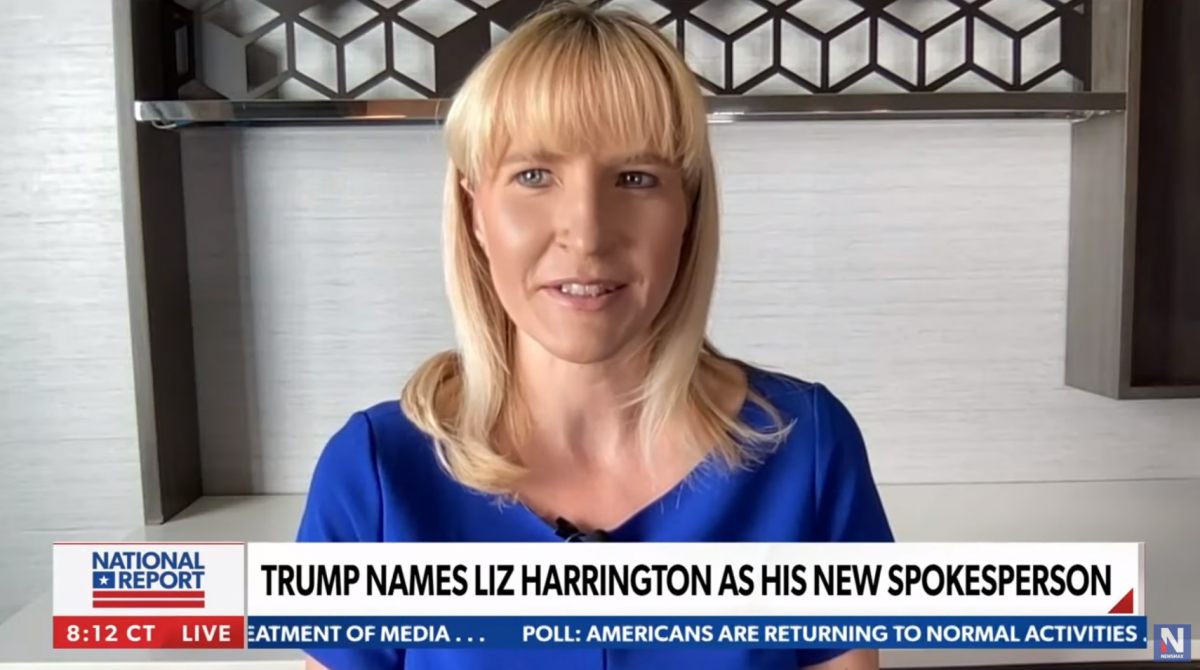 "We need to be out there speaking the truth, energizing the millions of Americans who really support this country, support President Trump; and this rally is going to be really important (Ohio on June 26) we're going to be rallying for Max Miller who is challenging one of these ten Benedict Arnolds in the House who sided with the Democrats and who were really a disgrace to our Party ... "

Newsmax' Emma Rechenberg 0:00
Former President Trump announced Tuesday he's named a new spokesperson. It is former Republican National Committee spokesperson Liz Harrington replacing Jason Miller. The President said this in the announcement saying Liz Harrington is a fighter. She was an important part of our receiving more votes than any incumbent president in US history. Far more than we received for the first time we want. Liz Harrington joins us now. Liz, good to see you. Congrats on the new roll. Good to see you. Thank you so much. Absolutely. I kind of want to know, how did it happen, the call when President Trump asked you to speak for him on a national stage.

Liz Harrington 0:36
It was very exciting. It's such an honor to even be considered. And it was just President Trump who is so nice and so cordial and personable. And we had a great conversation and he's ready to get back back out there. And so my I'm ready to fight for this country, because we're in serious peril right now. You see, from the border to our energy independence to inflation, from critical race theory, so many issues, really tearing at the heart of our nation. We have to get back out there and I couldn't be more honored to serve in this position and help the president in any way I can.

ER 1:13
Well, we're actually going to see President Trump in a more public setting where he's announced that he's going to start up those rallies again. Next Saturday, June 26. At the Lorain County Fairgrounds in Ohio, of course, we saw these big rallies during the 2020 election campaign. But what can people expect to hear from the former president? Just two Saturdays from now?

LH 1:37
Well, it's so important, we think that we really can't wait til 2022 we need to be out there speaking the truth, really energizing the millions of Americans who support this country support President Trump and this rally is going to be really important. We're going to be out there rallying for Max Miller, who's challenging one of the 10 Benedict Arnold's in the House, who sided with the Democrats, and really, were a disgrace to our party. And we think it's really important to hold our party accountable to hold all politicians in Washington who have really sold out our interests, to Communist China, to the swamp to everything but the American people. So we're going to be out there talking about that, talking about the critical issues that are going on. And following that we're going to be at the border on June 30, which Biden and Kamala Harris have failed to go visit to, because they've given it away to the drug cartels. And if you see what's happening, we've lost our sovereignty. There's human trafficking, there's drug trafficking, and this is an absolute disgrace. And if we're losing our sovereignty, what are we as a country? So that's going to be a very important visit as well.

ER 2:48
Yeah. You mentioned the President going to the border June 30. We recently saw President Biden making his first international trip, he met with leaders of the G7 NATO leaders, and then also Russian leader Vladimir Putin as well, the mainstream media covering that foreign trip, let's take a look at how that was reported.

Clip from Fake News 3:09
I can't think of a more successful diplomatic trip in the 21st century than this one. Biden didn't look Putin in the eye with a smile, Putin looked away. Again, you don't want to read too much or too little. But again, these are about public posturing. It's about how you project strength.

ER 3:27
Just a snippet there from media analysis. Liz, but what was the former president's take away from what he saw of Joe Biden making the journey?

LH 3:36
Well, that right there is worse than Pravda. I mean, nobody's putting a gun to their head. And I mean, this is just embarrassing. Everyone could see with their own eyes, Joe Biden was a bumbling mess. He confused Syria with Libya three times. He didn't have an answer for 30 seconds on the podium, it was totally incoherent. And more importantly, he sold out our interests. We got nothing out of that meeting. And that's how President Trump feels it was a good day for Russia, wasn't a good day for the United States. It was supposed to go five hours. Of course, Joe Biden could only go about three. And what did the American people get? I mean, Putin has his pipeline now that President Trump blocked for four years. And what did Joe Biden do on his first day of office, he canceled Keystone. And look at the gas prices. Look at the gas lines. And you just mentioned in the last segment you showed not only did we not get anything out of it, he gave Putin a target list of 16 areas of critical infrastructure that they can go ahead and try to hack. I mean, how about everything's off limits? And how about if you try anything, there's going to be serious consequences. I mean, that's what we saw through President Trump was peace through strength and everyone took him seriously. And you know, who had to bring flashcards to the meeting between President Trump and Putin, who, at this time we saw who had the flashcards and he still didn't get anything for the American people. Joe Biden.

ER 5:01
Let's talk about your boss what he's up to right now. Donald Trump actually recently penning a piece about a plan to get divisive and radical theories out of our schools. It's published on Real Clear Politics. It warns about the negative impact critical race theory curriculum could have on students. Clearly he is passionate about this topic. Does the President wish he would have taken a stronger action against CRT when he was in the White House?

LH 5:28
Well, that's why he established the 1776 Commission, which was absolutely fantastic. You can download the reports online, you can use it for curriculums. It was so important, and President Trump really believes that we have to teach what's so special and great about our country or otherwise, we're going to lose it. And this op ed, you can find it right now at the top of real clear politics.com. It shows a pathway forward how to get this divisive, disgusting Marxist ideology out of our schools. It has a seven point pathway forward how to do that specifically because not only are kids being taught to hate their country, they're being taught to hate themselves and to hate each other is a total antithesis of what Martin Luther King Jr. Practice and preached. We need to get this disgusting, dangerous anti American ideology out of our schools. President Trump tells you exactly how we can do that.

ER 6:25
Alright, that is Liz Harrington, the spokesperson now for the former president, I'm sure we'll be seeing a lot more of Liz, thanks so much for coming on today. Enjoy your weekend. 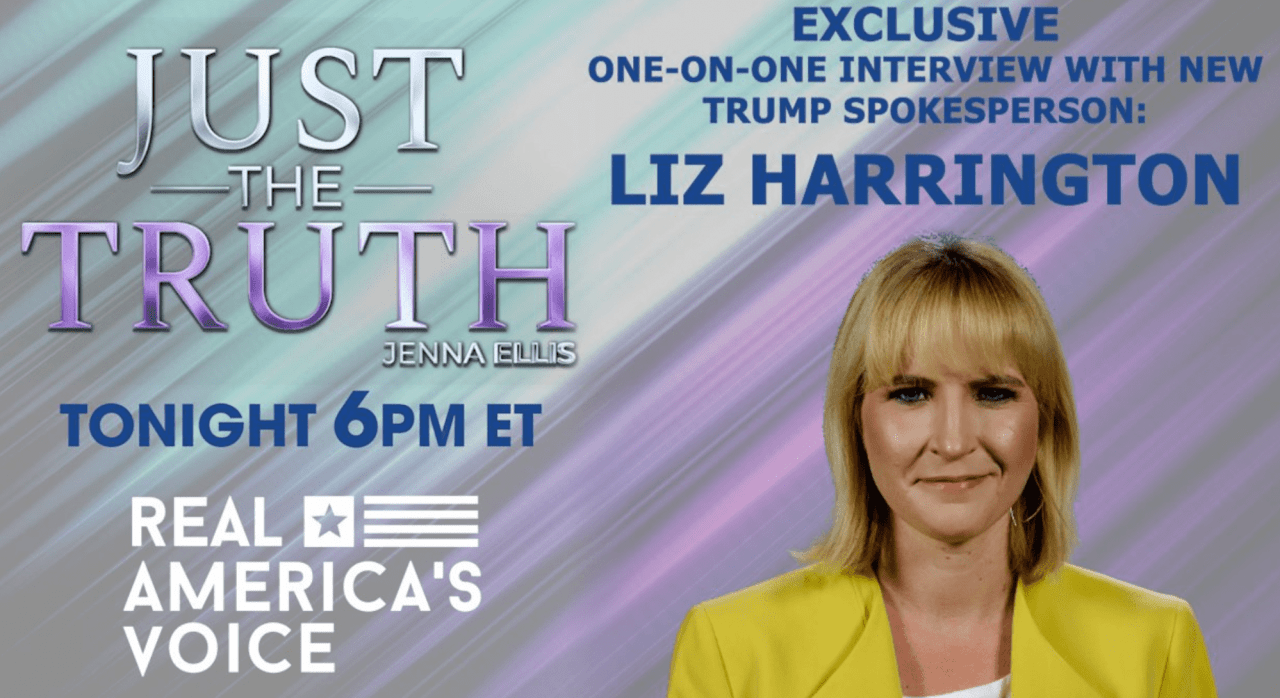