Citizen Journalists: "You're able to expose a lot more" ~ Gen Flynn
24 January 2023
Their time is short. Fake News can no longer hide. Even those who before didn't question the scripted corporate news are now wondering if they can trust any mainstream news sources. CNN, MSNBC, and many more liberal...
Read More RON PAUL: PolitiFact’s Crummy ‘Fact Checking’ on Coronavirus Shots Safety
21 December 2022
Ron Paul is a very well-known physician and libertarian political figure. Ron Paul isn't anti-vaccine, but he is anti-forced-vaccine. Read what he has to say about the fact-checking narrative below....
Read More MAGNIFICENT MERCOLA: How Gates Is Bankrolling the Media Bill Gates' image as an altruistic philanthropist is strong, despite multiple highly questionable dealings, like a long-term relationship with Jeffrey Epstein and desire to reinvent African society and agricultural practices. Why haven't you heard more about Gates' dark side?

When you're one of the richest people in the world, you can buy virtually anything you want — including control of the media so that it only prints favorable press. If you have enough money — and Bill Gates certainly does — you can even get major media companies like ViacomCBS, which runs MTV, VH1, Nickelodeon and BET, among others, to insert your approved PSAs into their programming.1

In the past, the Bill & Melinda Gates Foundation (BMGF) funded the placement of "educational" messages in popular TV shows such as "ER," "Law & Order: SVU" and "Private Practice," including topics such as HIV prevention, surgical safety and the spread of infectious diseases, i.e., vaccinations.2 But this is only the beginning.

Generally speaking, companies know better than to bite the hand that feeds them, and Bill Gates has had a hand in feeding hundreds of media outlets and ventures. Via more than 30,000 grants, Gates has contributed at least $319 million to the media, Alan MacLeod, a senior staff writer for MintPress News, revealed.3

"Recipients of this cash include many of America's most important news outlets, including CNN, NBC, NPR, PBS and The Atlantic.

"Gates also sponsors a myriad of influential foreign organizations, including the BBC, The Guardian, The Financial Times and The Daily Telegraph in the United Kingdom; prominent European newspapers such as Le Monde (France), Der Spiegel (Germany) and El País (Spain); as well as big global broadcasters like Al-Jazeera."4

Examples of the Gates Foundations grants include $24,663,066 to NPR and $12,951,391 to The Guardian. Another $3.6 million grant to CNN was earmarked for "report[ing] on gender equality with a particular focus on least developed countries, producing journalism on the everyday inequalities endured by women and girls across the world," while a $2.3 million grant to the Texas Tribune was intended "to increase public awareness and engagement of education reform issues in Texas."5

"Given that Bill is one of the charter schools' most fervent supporters, a cynic might interpret this as planting pro-corporate charter school propaganda into the media, disguised as objective news reporting," MacLeod wrote.6

More than $38 million of Gates' money has been funneled to investigative journalism centers. The majority — $20.4 million — went to the International Center for Journalists to "expand and develop African media."7 Another $3.8 million went to Premium Times Centre for Investigative Journalism in Nigeria. It might appear that Gates is intent on creating more favorable PR in Africa.

The Alliance for a Green Revolution in Africa (AGRA), an organization funded by the Bill & Melinda Gates Foundation,8 is essentially a Gates Foundation subsidiary, and while some of its projects appear to be beneficial, most of its goals are centered on promoting biotechnology and chemical fertilizers. AGRA was launched in 2006 with funding from the Gates Foundation and the Rockefeller Foundation.

After more than a decade, AGRA's influence has significantly worsened the situation in the 18 African nations targeted by this "philanthropic" endeavor. Hunger under AGRA's direction increased by 30% and rural poverty rose dramatically.9,10

Gates' tentacles are far-reaching in the press. From press and journalism associations to journalistic training, Gates is an overarching keeper of the press, which makes true objective reporting pertaining to Gates himself — or his many initiatives — virtually impossible. According to MacLeod:11

"Today, it is possible for an individual to train as a reporter thanks to a Gates Foundation grant, find work at a Gates-funded outlet, and to belong to a press association funded by Gates. This is especially true of journalists working in the fields of health, education and global development, the ones Gates himself is most active in and where scrutiny of the billionaire's actions and motives are most necessary."

Ironically, "The foundation even helped fund a 2016 report13 from the American Press Institute that was used to develop guidelines14 on how newsrooms can maintain editorial independence from philanthropic funders," Schwab writes, adding, "Gates's generosity appears to have helped foster an increasingly friendly media environment for the world's most visible charity."

But as you might suspect, Gates' donations come with strings attached. Those given to NPR were intended to target coverage of global health and education:15

"When Gates gives money to newsrooms, it restricts how the money is used — often for topics, like global health and education, on which the foundation works — which can help elevate its agenda in the news media.

"For example, in 2015 Gates gave $383,000 to the Poynter Institute, a widely-cited authority on journalism ethics … earmarking the funds 'to improve the accuracy in worldwide media of claims related to global health and development.' Poynter senior vice president Kelly McBride said Gates's money was passed on to media fact-checking sites ...

"Since 2000, the Gates Foundation has given NPR $17.5 million [now up to $24.6 million16] through 10 charitable grants — all of them earmarked for coverage of global health and education, specific issues on which Gates works …

"Even when NPR publishes critical reporting on Gates, it can feel scripted. In February 2018, NPR ran a story headlined 'Bill Gates Addresses 'Tough Questions' on Poverty and Power.' The 'tough questions' NPR posed in this Q&A were mostly based on a list curated by Gates himself, which he previously answered in a letter posted to his foundation's website."

Are Gates' Power and Wealth Dangerous?

The level of Gates' wealth is unfathomable to most people. With a net worth of $130.5 billion,17 he yields incredible power over education, health and social policies. Speaking with MintPress News, Linsey McGoey, a professor of sociology at the University of Essex, U.K., explained that Gates' philanthropy comes with a price:18

"Philanthropy can and is being used deliberately to divert attention away from different forms of economic exploitation that underpin global inequality today.

"The new 'philanthrocapitalism' threatens democracy by increasing the power of the corporate sector at the expense of the public sector organizations, which increasingly face budget squeezes, in part by excessively remunerating for-profit organizations to deliver public services that could be delivered more cheaply without private sector involvement."

In a report by Global Justice Now, the excessive global influence held by the Gates Foundation is illustrated, starting with the $2 billion the foundation has spent on agriculture, primarily in sub-Saharan Africa and South Asia.

"It is the world's fifth largest donor to agriculture, spending $389 million in 2013; only Germany, Japan, Norway and the US have larger bilateral aid programmes to agriculture," the report noted, and, "With funding comes in influence."21

Gates not only controls the media but is also the largest owner of farmland in the U.S.22 By 2030, Gates is pushing for drastic, fundamental changes, including widespread consumption of fake meat, adoption of next-generation nuclear energy and the growth of a fugus as a new type of nutritional protein.23

Meanwhile, the deadline Gates has given to reach "net zero" carbon emissions is 2050,24 another red flag. Navdanya's report, "Earth Democracy: Connecting Rights of Mother Earth to Human Rights and Well-Being of All," explains:25

"… 'Net Zero' is a new strategy to get rid of small farmers in first through 'digital farming' and 'farming without farmers' and then through the burden of fake carbon accounting.

"Carbon offsets and the new accounting trick of 'net zero' does not mean zero emissions. It means the rich polluters will continue to pollute and also grab the land and resources of those who have not polluted — indigenous people and small farmers — for carbon offsets."

Who Else Is Controlling the Media?

Gates' power over the media is immense, but he's a not a sole actor. Other players in media control include BlackRock and the Vanguard Group, the two largest asset management firms in the world, which also control Big Pharma.26 They're at the top of a pyramid that controls basically everything, but you don't hear about their terrifying monopoly because they also own the media.

Below is a list of companies in which Vanguard and Blackrock strategically hold a large investment interest. Consider how the products and services provided by these companies are inextricably intertwined with your daily life.28

As is illuminated in the video, "The Puppet Masters Portfolios," Vanguard and Blackrock:29

As it stands, it's important to be aware that conventional media are under the control of powerful influences — be it Bill Gates, Blackrock or Vanguard — and their primary intent isn't to give you objective information but, rather, to further the agendas of those influences. 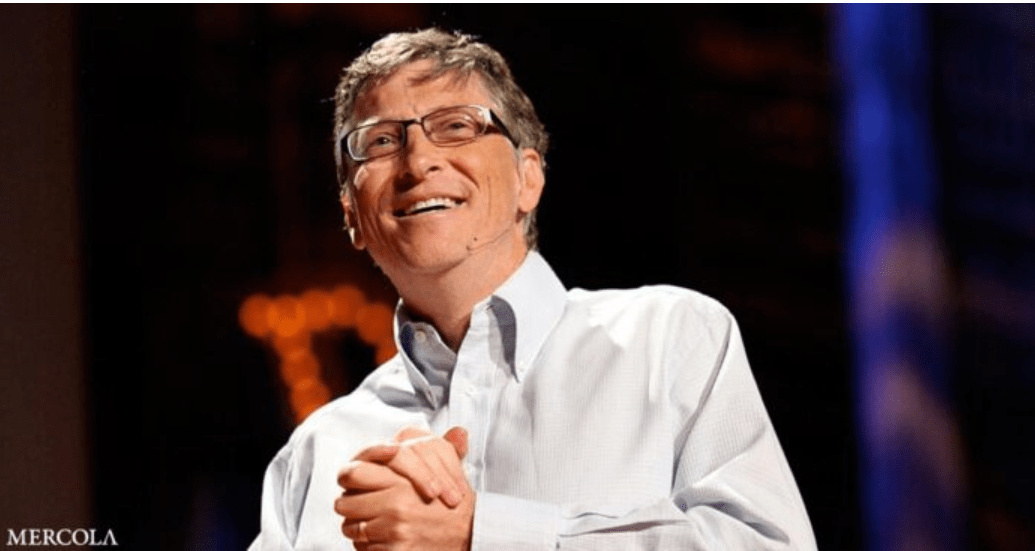 In the video below, Russell Brand succinctly points out that the shadowy world in which Epstein operated is riddled with cover-ups and connections that the mainstream media and the global "powers that be" are desperately trying to keep hidden. And, yes, it does connect with vaccines and Bill Gates.