Why Do Democrats and Leftists Blatantly Ignore the CCP Human Rights Abuses?
04 February 2021
Why do those who claim to care about human rights, those who are the first to call those on the right Nazis, seem to not care about what is going on in China, especially concerning the Uighurs? Take a look at the article below. See if you can read al...
Read More The Enemy is Inside the Gates
13 January 2021
"Secretary of State Michael Pompeo warned lawmakers that the threat from the Chinese Communist Party is "inside the gates" during a meeting with House Republican lawmakers on Friday."...
Read More Make America Great Again (Again) vs The Great Reset - Guess Who Wins
30 October 2020
Globalists and their shills are promoting The Great Reset. Why? They want to scare you and control you as the farm animal. What's MAGA about? Mankind putting off their shackles and growing up - finally. Just what IS the Great Reset? Read be...
Read More
Font size: + –
Subscribe to this blog post Unsubscribe
Print Does the ACLU still defend free speech or do they only defend the speech their liberals like? (In other words, it's not about "Civil Liberties" anymore, is it?)

"I have previously written, as a long supporter of the American Civil Liberties Union (ACLU), about my concern over how the venerable group has changed under its current leadership, including a departure from its long robust defense of free speech. Recently, the ACLU has abandoned its famed neutrality and has not supported some on the right while supporting those on the left.

"Now, the ACLU's Samuel Crankshaw in Kentucky has targeted Transylvania University for admitting Nick Sandmann, who was falsely accused of abusing a Native American activist in front of Lincoln Memorial. (Crankshaw identifies as an ACLU staffer on social media) Despite various media organizations correcting the story and some settling with Sandmann, some in the media have continued to attack him. Yet, it is far more alarming to see an ACLU official rallying people against a young man whose chief offense appears to be that he is publicly (and unapologetically) conservative and pro-life.

"Crankshaw went to Facebook to alert people that Sandmann would be attending the college and expressing veiled outrage that the school would admit someone with his opposing views. He warns that this kid is "more dangerous" than figures like Milo Yiannopolous. The "danger" is that a young freshman holds conservative views that are shared by roughly half of this country:

"Does anyone else think it's a bit of a stain on Transylvania University for accepting Nick Sandman? I'm sure it's a "both sides" defense, but it's pretty counter to their mission and another instance of there not actually being equal sides to an issue. I think TU should accept anyone willing to have an open mind and engage in debate, regardless of their views. That's how we all learn. That's Transy's mission

"Having experienced the incredibly high standards Transy requires for admission and then holds its students to, this seems like a slap in the face. I hope some time in a real classroom changes him, but his twitter and public persona suggest otherwise.

"While the statement is from someone who expressly identifies as an ACLU staffer on social media, it is not a statement from the ACLU itself. Yet, the sentiment reflects the growing concern over the new direction of the ACLU and the shift away from neutrality in the support of free speech rights.

"Later Crankshaw responded to the National Review and said "The views I expressed on my Facebook page are my personal views that I shared on my personal time. I have a First Amendment right to express them just as Nick Sandmann has a First Amendment right to express his." Of course, none of us doubted that Sandmann has first amendment rights. The suggestion of his posting was that the university should have barred the admission of Sandmann due to his views. Indeed, he was expressing outrage that Sandmann was allowed to attend such an institution of higher education. While we have been discussing the intolerance for opposing views expressed at colleges, Crankshaw apparently does not even want to see people like Sandmann allowed into college.

"One person responding positively was Dr. Avery Tompkins, an Assistant Professor and Diversity Scholar at Transylvania University, acknowledged that the university supported diverse viewpoints but promised to closely monitor Sandmann while he is on campus: "If he were to cause problems by being disruptive, trolling, or engaging in unethical behavior of any kind, I would immediately document it (just like I would for any student doing the same thing)…and he would just be putting himself in a position for me to file a conduct report."

"Rather than say that there is no reason why this conservative student should be singled out in this way, Tompkins declares publicly "I get where you are coming from." Where would that be? Cranksaw was coming from a place where a wrongly accused conservative teenager will be harassed or targeted for daring to take his views to a college.

"I appreciate Tompkins noting that students cannot be denied admission based on their political views, though that was once assumed. Yet, Tompkins labels this incoming freshman as part of an anti-intellectual movement and publicly assumes that Sandmann will reject core principles of learning. This is a freshman being publicly shredded by a professor at his school. Tompkins then expresses the same uncertainty why this student would pick a university dedicated to higher education and "the antithesis of what he belies and promotes."

"Despite Tompkins later apology, Cranksaw responded that her stated hostility and bias toward this student is precisely what wants to see in higher education and "why [Transylvania University] is a great place to learn."

"Cranksaw was describing the exercise of free speech by someone with opposing views as unacceptable. Tompkins responds that she will be closely watching him. Both single out this one students for such added scrutiny and Cranksaw thanks Tompkins for the assurance of close monitoring. I have repeatedly defended the views of liberal academics attacking police, Trump, and a wide array of conservative causes. These are statements made outside of the school. Here, however, Tompkins is speaking as an academic, acting a specific students, and promising to monitor his conduct. That is deeply problematic.

"Sandmann like all college students should feel greater freedom in expressing their views at colleges, not being closely monitored as someone with dangerous thoughts and ideas. That fact that figures in the ACLU and academia would publicly espouse such views of intolerance is a chilling example of how our faith in free speech has eroded in the recent years." 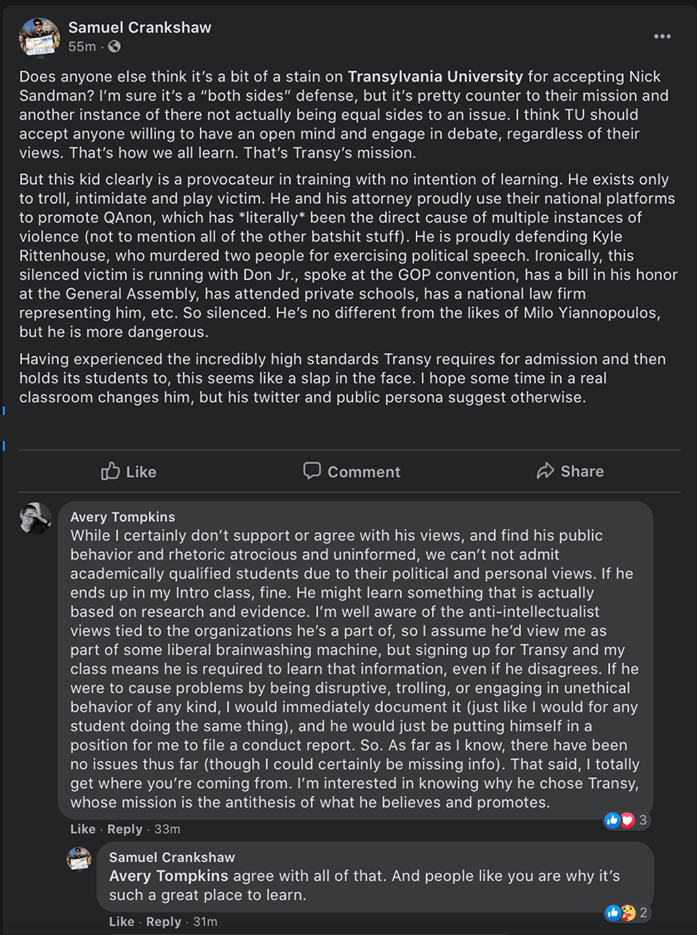 "Transylvania University has responded to my inquiry with the following statement:

"A college campus is a place where the wide variety of backgrounds, experiences and opinions of the community — students, staff, faculty and alumni — meet. Transylvania, like nearly every campus, is composed of those holding the full range of viewpoints.These differences often form the backbone of a vibrant and challenging educational experience. In this place of divergence, we strive to foster dialogue and listen to each other with generosity and a presumption of goodwill in the pursuit of understanding.

"The goal of a liberal arts education is to give students the skills and ability to engage in encounters that may cause them to reflect and think differently or to understand and validate their original belief or viewpoint. In either case, the exposure to the ideas, individuals and diverse viewpoints and the subsequent reflection is the critical aspect.
There are two things that, as a university, we are not able to discuss: our students (without their permission) and personnel matters. In response to posts on social media and other websites over the Labor Day weekend, we reiterate that point. A review of the situation will be conducted expeditiously by the appropriate university officials.

"I want to apologize for my mistake in singling out a student and any misunderstandings that arose from that. One of my favorite things about working at a liberal arts institution is that the University community has diverse perspectives. All students, faculty, and staff are able to engage in civil discourse with those whose views may be different from their own, and to learn about those views in an academic setting. I value and support these conversations with students, and I know that students value these conversations with their peers as well."

"I have previously written, as a long supporter of the American Civil Liberties Union (ACLU), about my concern over how the venerable group has changed under its current leadership, including a departure from its long robust defense of free speech."
https://jonathanturley.org/2020/09/08/aclu-official-attacks-university-for-admitting-nick-sandmann-while-professor-promises-to-monitor-his-conduct/ 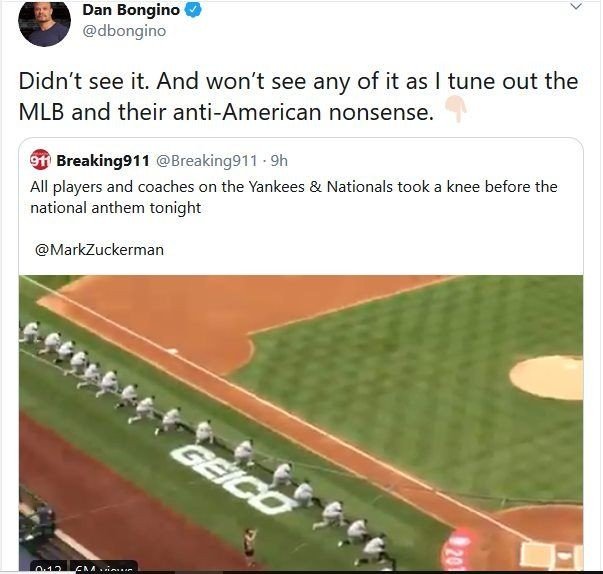 Ruby Ray Media - They kneel to whom they serve...

As though it was done to appease all, a few changes were made when it comes to pro-sport athlete servants kneeling before&nbsp;their masters.&nbsp; Instead of kneeling DURING the National Anthem, they chose to kneel BEFORE in a show of 'solidarity' e
https://rubyraymedia.com/index.php/top-stories-view-all-articles/they-kneel-to-whom-they-serve

MyRR Arsenal: A mighty tide has begun, people are&nbsp;coming to RRM for many reasons, including&nbsp;a censorship-free&nbsp;safe haven for their content--and best of all, it's free!&nbsp; In addition to enjoying some of the best news and commentary
https://rubyraymedia.com/index.php/top-stories-view-all-articles/host-your-content-where-it-can-t-be-censored
Tweet
How do you feel about this post?
0
0
0
0
0