Zapping against that devilish prick? This post is going to be controversial with all the censorship going on around CV19 and vaccines. Who would have thought that we would ever have to duck and dive in order to express our opinions in those allegedly "democratic" countries most of us live in?

The people who brought us the plandemic are now out and about trying to get everyone vaccinated with their experimental RNA-shots as soon as possible, putting enormous pressure on people with promises of relative freedom once you have accepted to become a lab rat for them. Many corporate companies even threaten dismissal of those who don't get the prick.

Have you already succumbed to the pressure?

I couldn't blame you. The pressure and propaganda is simply enormous. And many of us still have a remainder of trust in our public health system. However, the danger may be much more than just a 0.01% chance of experiencing serious complications or sudden death shortly after the vaccination.

I have seen statistics according to which the number of reported death after vaccination for this vaccination campaign is already as high as the last 13 years combined. None of these vaccines has been through the normal multi year safety studies required. The permanent state of Covid emergency is the basis for pushing these through, another reason why the powers-that-be will not let up harassing you, despite there being absolutely no sound science behind the whole scamdemic.

Of course all "factcheckers" agree that there is no problem with those shots, so don't expect it to show up in the Mainstream Media any time soon. Dr. Vernon Coleman has put together a resource page where you can find lots of further info on vaccine complications, most of it of course anecdotal.

Let's See what a former Pfizer Chief Scientist has to say:

Mike Yeadon can surely not be brushed off as just another conspiracy nut, having been the former chief scientist at Vax manufacturer Pfizer!

Thai-German Professor Doctor Sucharit Bakhdi, long term head of the microbiology and infectious diseases department at the medical faculty of Kiel University in Germany, explained in a recent interview with Del Bigtree how the antibody stimulating RNA-vaccines stimulate the body towards attacking the walls of your capillary blood vessels, triggering the blood clotting reaction as a defensive response. This may happen over time and not immediately.

It is being said that the new type of vaccines are not really vaccines but rather a platform for future genetic modification of humans, a new operating system of sorts. (No wonder Bill Gates loves it)
This can interlink with future upgrades, (booster shots) microchips "to monitor if you have Covid" or electromagnetic information via 5g.
All in all, an entry port into your genetic make up, designed to achieve all kinds of objectives and your radiant health seems to figure quite low in that list:

Do you want to have any of that in your body?

Can the zapper help us to break down alien biological substances injected into our body?

This is now where it gets controversial: How do we know that a zapper will break down these alien substances?

There are no studies and there will not be any in the foreseeable future. (just like there are no safety studies for those experimental vaccines btw.)
We are basically engaging in a counter experiment. If you see all your vaccinated friends getting into increasing health trouble while your health thrives, you will know that you were on the right track.
We can only infer from past experience. People have reported that zapping breaks down snake venom, another alien biological substance that can lead to death or severe incapacitation. It also helps the body to eliminate all other toxins such as the heavy metal adjvants that come with every vaccine.
Many years ago, I came back from my trip to Uganda with Don Croft and on the way back in, they forced me to take a yellow fever vaccine even though it made no sense at all as I was returning from the "risk area" and if I already had it, the vaccine would have made it worse. All arguing with the young doctor was futile and my choice was 3 days of quarantine at the airport or get the shot. So I took it and slapped my zapper on the spot right away:

No irritation, nothing ever happened.

I am confident that it will work, but no guarantees or promises, understood? 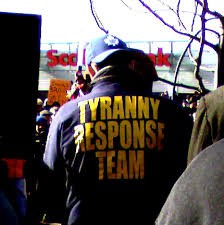 How Orgonite is aiding in the fight against the "Great Reset" freak show: Evil cannot thrive in the light!

Being myself one of the "early adopters" of orgonite, I sometimes feel a little bit like a dinosaur among the newer kids on the block. A lot has happened since Don Croft took the pioneering step of combining Wilhelm Reich's classical cloudbuster concept with Karl Welz's new invention of "Orgonite".