Time to fess up.

You know, fess up about how you have been doubting the most accomplished President of the United States. Go ahead, admit it. Admit how you may have let it into your thoughts, if not your words, that President Trump may not be our president in 2021 but he will come back in 2024, or something like that.

Many prominent others have thought, as well as spoken, such.

Heck, even Mitch McConnell congratulated CreepyJoe and his evil side kick for 'winning' …

Trump's allies slam Mitch McConnell for congratulating Biden https://t.co/ak9nu6420L via @MailOnline. Mitch, 75,000,000 VOTES, a record for a sitting President (by a lot). Too soon to give up. Republican Party must finally learn to fight. People are angry!

Why would Mitch McConnell deliver such a body blow to patriots and Trump supporters? What’s he trying to tell us? pic.twitter.com/pF2EenjrSo

Do you really believe that the thousands of accomplishments President Trump and his administration have secured for We the People over the last hard working 4 years will be allowed to fall by the way side?

From tax cuts targeted to benefit the middle class to task forces specifically created to take down human traffickers and child sex predators, President Trump has done more for We the People then any administration before this. 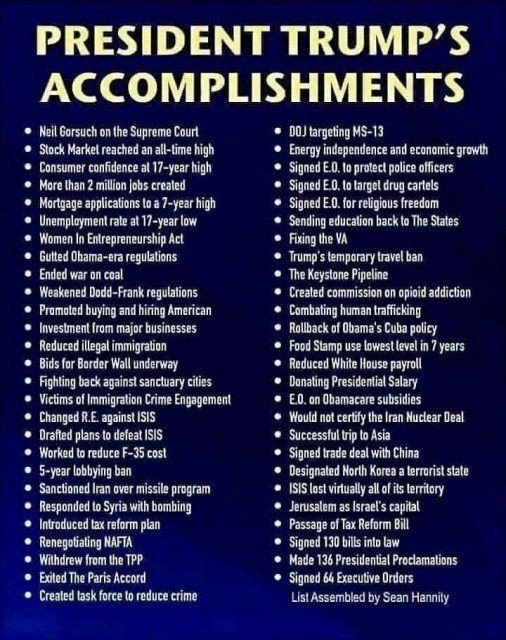 Think about the Great Patriot President Trump truly is.

He has been working non stop, without a salary since taking presidential office, to bring this country back from the brink of financial and military ruin.

Do you really believe he is going to let us down now?

Do you really believe President Trump is going to walk away from this Presidency he worked so hard to win, and DID WIN, to allow a take over by a chicom infiltrated corrupt criminal cabal deep state shadow government?

NO my fine friends, President Trump will not ever let that happen and he will never let us down.

I am confident President Trump will continue to be our President and the Greatest Patriot for 4 more years.

I HAVE TRUSTED his plan from the beginning.

And that plan is still in motion.

NEVER STOP FIGHTING until it's won.

President Trump KNOWS our great country is at war!

Whether you love him or hate him, President Trump's enthusiasm and the exuberant Love he has for the masses throughout the World - and they for him - has already given him the win!!!
We need only sit back and watch; but I ask more from those of you who know what is at stake. Let us come together and serve, as one, to usher in a brilliant new golden age built on the foundation of our LOVE for one another. Do not allow hate to enter even when it is thrown in your face. Remember many great citizens of America and the world still do not know that it is hate and anger that fuels our enemy and thus fools them into hating where there is no basis for it....
https://rubyraymedia.com/index.php/top-stories/landslide2020-view-all-articles/this-is-far-from-over-1

In addition to enjoying some of the best news and commentary on the internet, membership in our patriot community is growing rapidly. Free Membership gives you immediate access to your MyRR Timeline, Pages and Groups. Simply posting content here exactly like you would on FB and Twitt, secures it from censorship.
As you establish your presence, you'll start noticing your RRM content is drawing many times more hits than you are seeing on deepstate-controlled social media. We designed RRM to be your most potent tool for reaching out and touching the world....
https://rubyraymedia.com/index.php/top-stories-view-all-articles/host-your-content-where-it-can-t-be-censored
Tweet
How do you feel about this post?
2
0
0
0
0