Patriotism Borne of Accomplishment on Display at the RNC

"The 2020 Republican National Convention kicked off on Monday in Charlotte, North Carolina.

President Trump is expected to make an appearance each night of the convention.

After weeks and weeks of Democrat violence, rioting and Marxist lecturing this open tonight was just AMAZING!

Thank you again RNC and the Trump Campaign for this glorious reminder of the blessings of this great nation!

"You are now fellow citizens of the greatest nation on the face of God's Earth."

Hailing from Bolivia, Lebanon, India, Sudan, and Ghana, these five new Americans have embraced our country's values and laws. They'll contribute both as citizens and as participants in the great American economy. The group includes a small business owner, a teacher, a software developer, a veterinarian, and a medical worker.

President Trump believes in an immigration system that is pro-American, pro-immigrant, and pro-worker. By restoring the rule of law, fairness, and security at our border, our leaders in Washington can protect the safety and prosperity of all Americans while helping our new citizens assimilate and flourish.

Last year, President Trump proposed moving America to a merit-based immigration system that would accomplish just that. "Our plan includes a sweeping modernization of our dysfunctional legal immigration process," President Trump said. "The system will finally be fair, transparent, and promote equality and opportunity for all."

Despite inaction from Congress, America's immigration system continues to make strides under President Trump. Historic agreements with Mexico and other countries are making the border safer for legal immigrants and protecting citizens all across our country.

Thanks to President Trump and thousands of brave law enforcement officers who make the system work each day, all Americans—including millions of devoted legal immigrants—have an opportunity to achieve the American Dream for their families.

A Night of Heroes: Chinese Born Chen Guangcheng Stood Up Against China's One-Child Policy – Today He Stands with President Trump 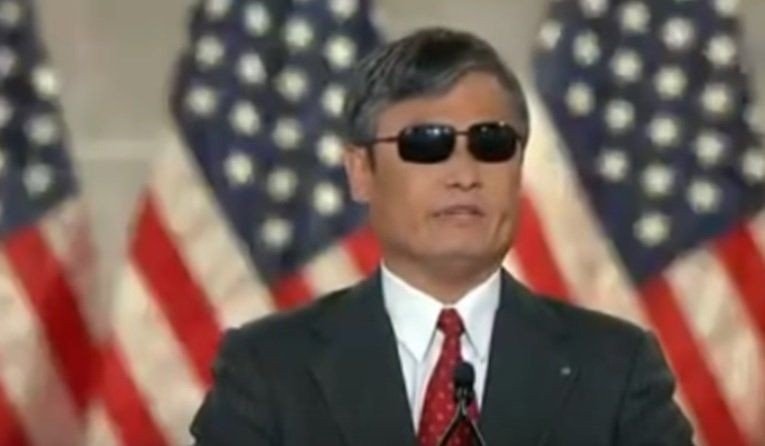 "Chinese born Chen Guangcheng stood up against China and it's one-child policy. Now he stands for President Trump whom he says he is doing "for the sake of the world".

Chen grew up in extreme poverty in the Chinese countryside in the 1970s. At the time, China was in the middle of a sociopolitical restructuring— Communist Party leader Mao Zedong's so-called Cultural Revolution.
As he wrote in his memoir, "The Barefoot Lawyer," he largely had a happy childhood, with his brothers teaching him how to recognize the feel and sounds of things in the world.

Chen lost his sight following an illness when he was five months old. Over the years, he had seve1980 ral operations done to try to help him regain his sight, but none were successful.

His mother and father worked extremely hard. He says his mother would work all day in the fields, and yet often would only earn enough to put food on the table for her children, while she herself went hungry.

Chen received his law degree and began standing up for the little guy in China. He eventually stood up to China's one-child policy and its estimated deaths of more than 400 million people since its inception. Chen was thrown in prison and beaten. He eventually escaped to the US Embassy in Beijing and then to the US.

"Standing up to tyranny is not easy, I know" Chen began his talk. "The CCP is an enemy to humanity. It is terrorism its own people and it is threatening the well being of the world." Chen continued:

The US must use its values of freedom, democracy and the rule of law to gather a coalition of other democracies to stop CCP's aggression. President Trump has led on this and we need the other countries to join him in this fight. A fight for our world future.
Standing up to fight an unfairness isn't easy. I know, so does President Trump but he has shown the courage to lead in that fight. We need to support, vote and fight for President Trump for the sake of the world." "