UPDATE : 13 OCT 2020
"Here's the nursing-home order Andy Cuomo signed, killing thousands of elderly New Yorkers. (Via @JaniceDean) His Dept. of Health tried to scrub it from the Internet. The cover-up didn't work." 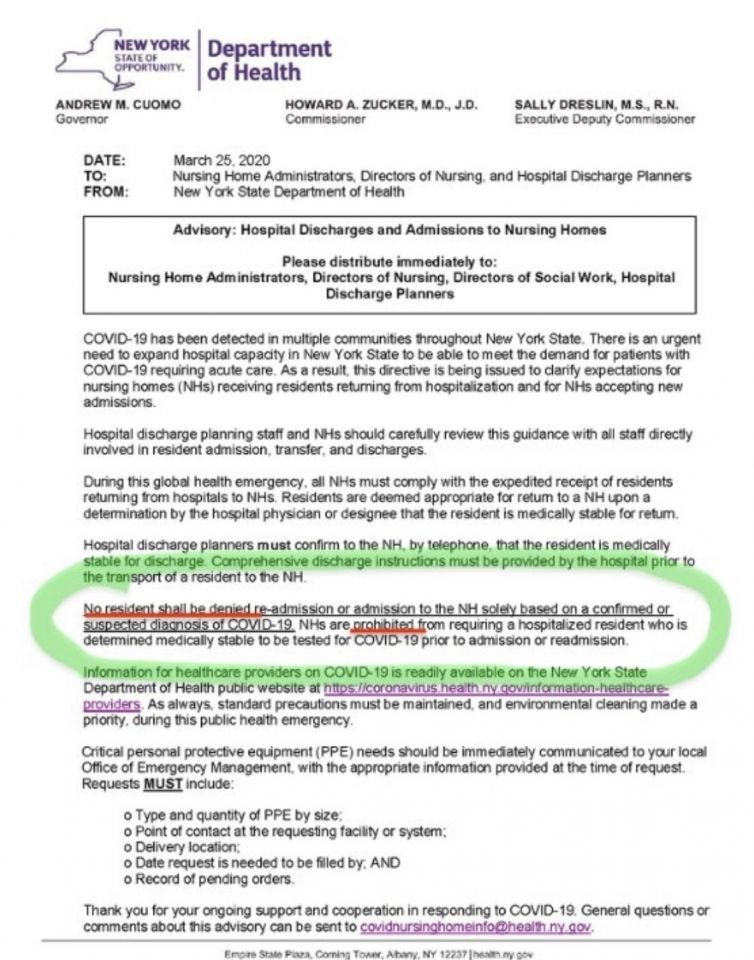 Re: New York
Even though the paper work which was searched for and eventually discovered by the DOJ details Nursing Home clients WERE allowed entrance into the facilities without a covid test, Gov. Andrew Cuomo, being the evil reprobate he is, continues to blame others for his own mis-deeds:

"Writing in his new memoir, Gov. Andrew Cuomo again blamed Republicans and The Post for the controversy surrounding his own policy barring nursing homes from turning away people on the basis of a coronavirus diagnosis."

"The most painful aspect of the COVID crisis has been its devastating effect on our elderly in nursing homes," writes Cuomo in "American Crisis," out Tuesday."

"As of Sunday, (10 Oct 2020) nearly 6,700 people had died in nursing or adult-care facilities of confirmed or presumed cases of the coronavirus, according to state records."

"By early spring, Republicans needed an offense to distract from the narrative of their botched federal response — and they needed it badly," Cuomo continued. "So they decided to attack Democratic governors and blame them for nursing homes."

"Under a state Department of Health mandate issued in March, nursing homes were prohibited from turning away residents on the basis of a positive COVID-19 test, even as Cuomo repeatedly acknowledged that seniors were among the most vulnerable to the contagion."

"It wasn't just me," he continued. "[Gov.] Phil Murphy in New Jersey, Gretchen Whitmer in Michigan, Gavin Newsom in California and Tom Wolf in Pennsylvania were all in the Republican crosshairs on nursing homes. As the states with the most deaths were Democratic states, the Trump forces saw us as an easy target."

"Cuomo has previously blamed conservative voices and The Post for raising criticism over the issue, despite bipartisan calls for independent probes into what effect the DOH mandate may have had on the nursing home death toll." 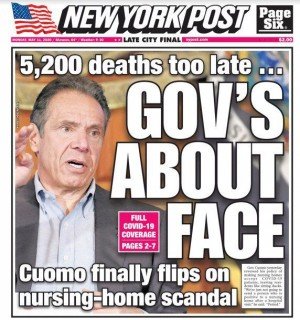 "He partially reversed the order in May without admitting that it may have cost lives."

"In his new book, however, Cuomo does concede one mistake — for not doing enough to make people understand what the mandate did and did not do."

"Unfortunately, although I tried, I never successfully communicated the facts on the situation," he wrote. "The Trump forces had a simple line: 'Thousands died in nursing homes.' It was true."

AUG 2020 A Federal investigation has been launched by the US Justice Department, requests for information have been formally made for documentation detailing nursing home related actions taken by New York's Democrat Governor Cuomo and the Democrat governors of New Jersey, Pennsylvania and Michigan during the first weeks of the Covid lock down. Reports indicate that hundreds of deaths would have been avoided in these 4 states if better policies had been implemented by the governors. 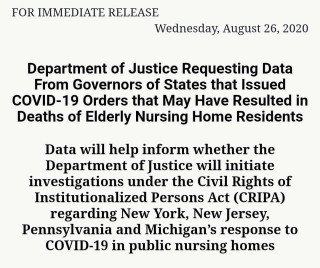 The investigation is receiving support across party lines, including one Democrat lawmaker praising the federal inquiry saying "It's the right thing to do. We need to know if any of the policies contributed to the deaths of 6,400 nursing home residents," said Queens Assemblyman Ron Kim."What happened to nursing home residents is a human right violation."

In particular, Governor Cuomo has been singled out for criticism about his senior resident lock down orders by Department of Health and Human Services spokesman Michael Caputo, who has roots in Western New York. Caputo stated. "For months, Gov. Andrew Cuomo has been ducking his personal responsibility for ordering the seeding of New York nursing homes with the coronavirus, a tragic mistake which killed thousands of grandmothers and grandfathers." He went on to say "He's shifted blame, he even tried to clear himself with a crony inquiry nobody in the nation took seriously. Thankfully, a federal investigation has begun, far from the dark and cynical manipulations of the second floor of the New York State Capitol."

Along with putting our more vulnerable population at risk, Cuomo imposed strict non-visitation orders upon the nursing home clients, not allowing any family or friends to visit at all, which is known to lead to cognitive decline and can worsen physical health issues, particularly in the elderly. Here we have one couple who suffered needlessly due to being locked away from each other, but were fortunate enough to be reunited before their situation got worse.

This couple is in New York, @NYGovCuomo is responsible for their separation. However, Praise to God, she lived, unlike many others he’s responsible for dying in Nursing Homes. https://t.co/CeUSZbLvzG

This investigation will be an uphill battle for the DOJ as the all to familiar Democrat 'defensive armor' is raised in an attempt to deflect any and all blame away from the governors involved.

Even before anything official about the details of what is found in this investigation hits the news cycle, the Democrat talking heads are circling their wagons around 2 talking points as follows:

The Democrats are quite familiar with this type of investigation. For over 3 years the investigations of President Trump have become their favorite pastime. The Democrat controlled House of Representatives has launched no less then 30 investigations scrutinizing every aspect of President Trump's life, including the ill fated Mueller Probe, and a failed impeachment attempt. Now the tables are turned and it's their turn to face their accusers. As we can see, they have already prepared a shield of defense before any offense is found. That tells me they know they have a reason to be nervous. 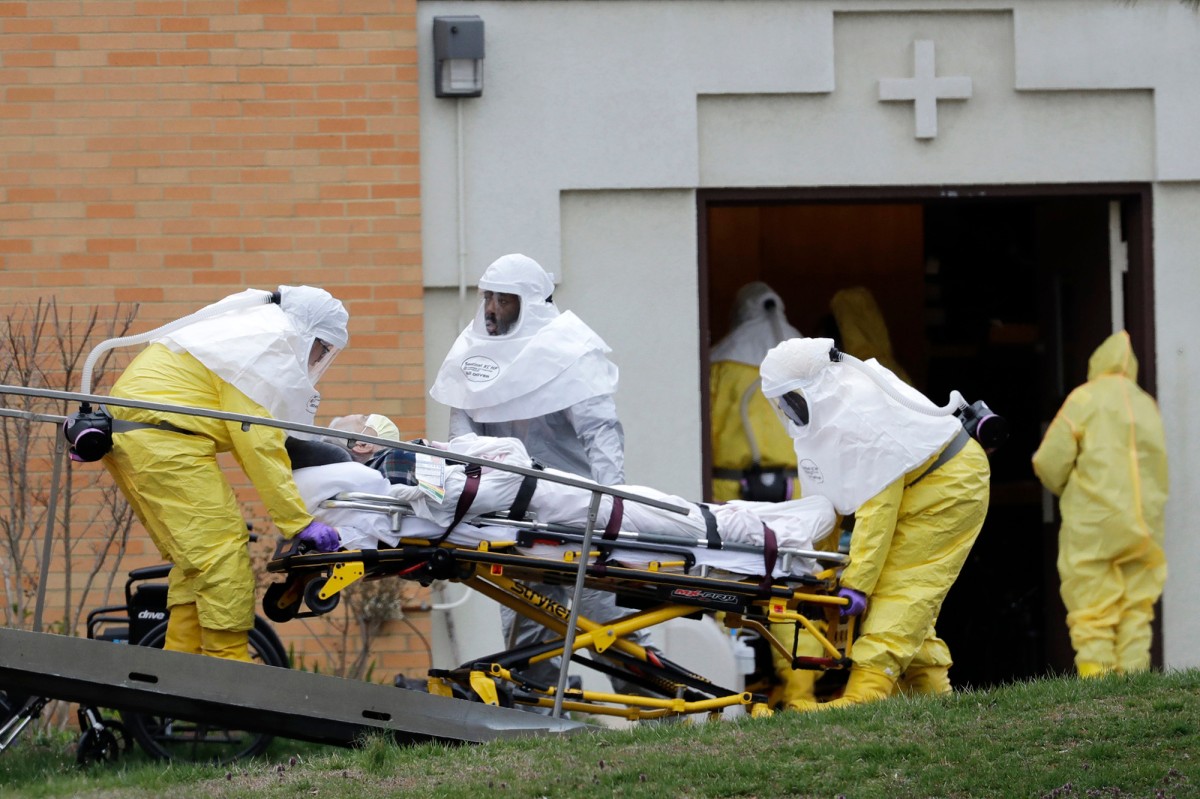 DOJ probes nursing home deaths in 4 states — including in NY

The US Justice Department has opened a preliminary inquiry into the coronavirus nursing home policies of New York, New Jersey, Pennsylvania and Michigan that it says "may have resulted in the deaths of thousands of elderly nursing home residents."

Data will help inform whether the Department of Justice will initiate investigations under the Civil Rights of Institutionalized Persons Act (CRIPA) regarding New York, New Jersey, Pennsylvania and Michigan's response to COVID-19 in public nursing homes
https://www.justice.gov/opa/pr/department-justice-requesting-data-governors-states-issued-covid-19-orders-may-have-resulted
Tweet
How do you feel about this post?
0
0
0
0
0