BUSTED! They Are Coming For You Joe!

Joe Biden's malicious activities during the #SpyGate scandal as well as his past corrupt dealings in Ukraine are going to be closely scrutinized now that he is 'officially' linked to the criminal investigation of both!
Is slowJoe soon to become jailbirdJoe?

Joe Biden is now the subject of an active federal criminal investigation into his role in the CI probe directed at Trump’s 2016 campaign.

"The criminal investigation into Biden also includes his activities in Ukraine.

"House investigators on Tuesday joined the Senate in asking the FBI to look into the Biden’s criminal history."

"President Trump on Wednesday accused Biden, Hillary and Obama of leading a “treasonous plot” and said Biden shouldn’t even be allowed to run for president."

"He added: “His father knew everything.”

"The president was referring to an interim report released by Republicans on the Senate Homeland Security and Finance Committees on their months-long joint investigation into the younger Biden’s role on the board of Ukrainian natural gas firm Burisma Holdings, as well as his alleged “extensive and complex financial transactions.” According to the report, an investment firm co-founded by Hunter Biden, Rosemont Seneca Thornton, “received $3.5 million in a wire transfer” from Elena Baturina, the wife of the former mayor of the Russian capital.

BREAKING: Joe Biden is the Subject of Federal Criminal Investigation Into His Role in Spygate and Activities in Ukraine

Oh WAIT! There is more!

Suspicious Activity Reports regarding Ukraine and Joe Biden's activities there are going to be released according to John Soloman - and THIS:

"The unredacted emails, obtained by Just the News, raise new questions about the accuracy of State Department officials' testimony during President Trump's impeachment proceedings. They also provide a window into how the department used redactions in a Freedom of Information Act case to hide the potentially explosive information just weeks before Election Day 2020.

"The emails show State Department officials under Trump openly worried a year before the 2020 election that the emerging storyline that Vice President Joe Biden may have engaged in a conflict of interest by presiding over Ukraine policy while his son worked for a corrupt Ukrainian gas company might prove to be "the mother load [sic] and main thread to play out, possibly thru Nov. 2020."

"The illegal monitoring was, in fact, ordered specifically to counter that narrative as well as another storyline that involved the liberal megadonor George Soros, the newly unredacted passages of the emails show.

"The conservative watchdog group Judicial Watch first raised concerns earlier this year that the U.S. embassy in Kiev run by then-Ambassador Marie Yovanovitch had created an "enemies list" by ordering the monitoring of social media accounts of prominent Americans last year when the Ukraine scandal about Joe and Hunter Biden first surfaced.

"After a protracted legal fight, the State Department released memos to the group last month confirming the embassy did in fact monitor the accounts of 13  Americans, including Fox News personalities Sean Hannity, Laura Ingraham and Lou Dobbs, the president's son Don Jr., his lawyer Rudy Giuliani as well as this reporter, whose articles in The Hill first shined a light on the Bidens' possible conflict of interests in Ukraine.

"The April 1 email was among those released, but it was heavily redacted to hide the statements showing the monitoring was ordered shut down specifically because it violated the law.

"Tom Fitton, the Judicial Watch president, accused the State Department of editing the documents to hide the truth from the American people.

" "It looks like this material was blacked out not for legal reason but for political reasons: namely to help Joe Biden," Fitton said. "Judicial Watch first exposed this illicit spy operation against Trump world, and the coverup of this material by the State Department for over a year is inexcusable. Our lawyers will review this new material and consider the legal ramifications." " (continued at the Just The News link) 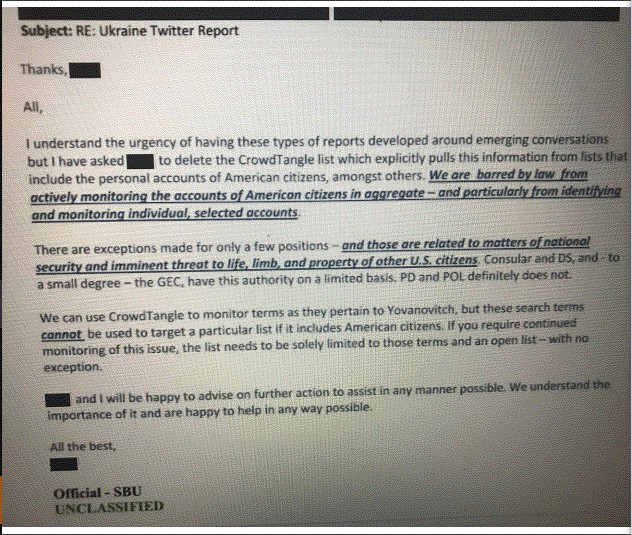 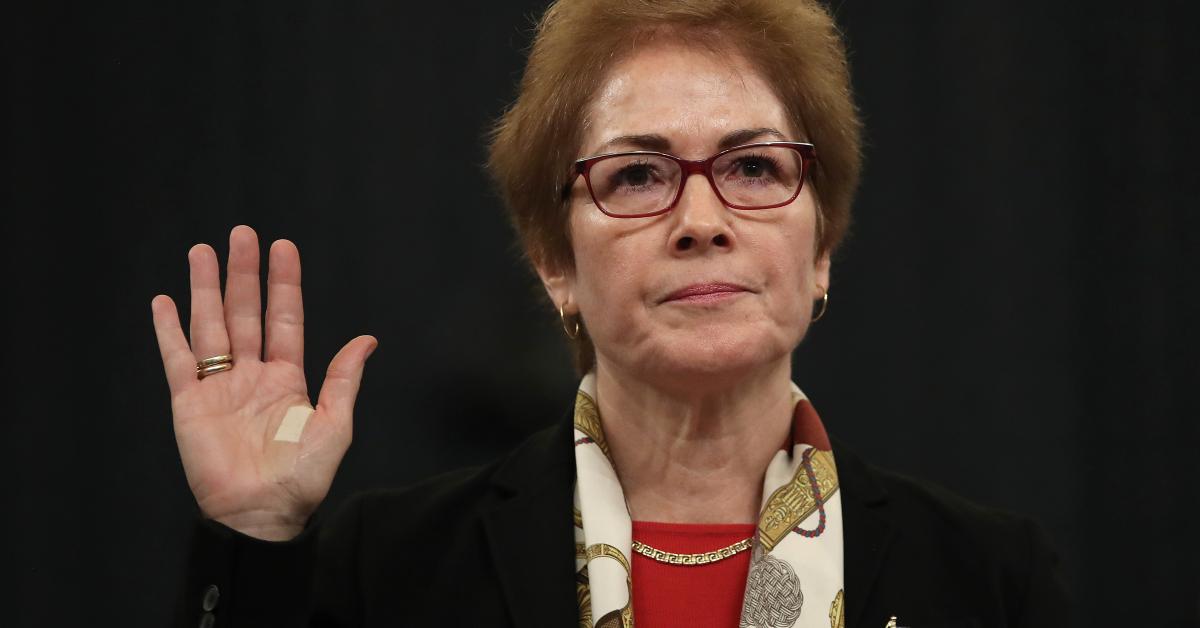