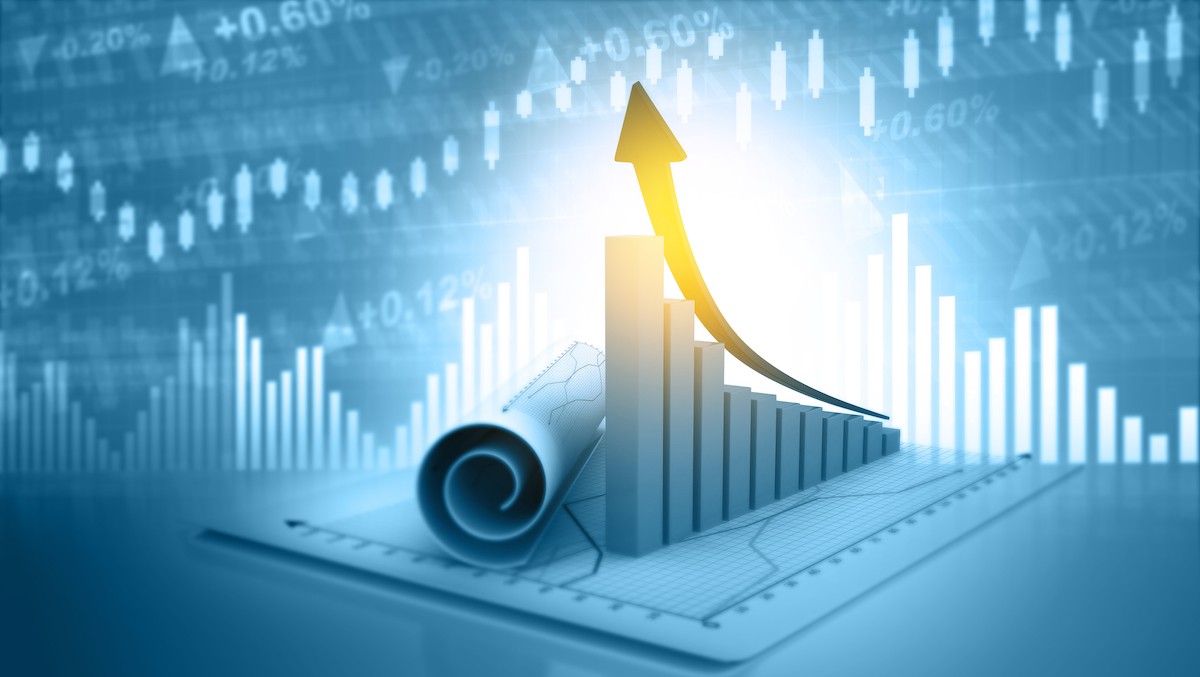 News broke this morning that real GDP grew at an annualized rate of 33.1% in the third quarter of 2020—beating expectations and setting an all-time record.

This jump in GDP is nearly double the previous record set 70 years ago.

News broke this morning that real GDP grew at an annualized rate of 33.1% in the third quarter of 2020—beating expectations and setting an all-time record.

This jump in GDP is nearly double the previous record set 70 years ago.

Thanks to President Trump’s policies, the American economy is weathering the global pandemic better than any other major Western country, including those of Europe. As the Council of Economic Advisers wrote this morning:

While the pandemic hit every major economy around the world, the United States experienced the least severe economic contraction of any major Western economy in the first half of 2020, with the Euro Area economy’s contraction being 1.5 times as severe as the contraction of the U.S. economy.

Since April, America has gained over 11.4 million jobs, recovering more than half of those lost because of lockdowns. Retail sales are already above pre-pandemic levels, many construction and manufacturing jobs have returned, business activity is at a 20-month high, and new jobless claims fell to their lowest level this week since the beginning of the pandemic.

This “V-shaped” recovery is beating economist predictions and outpacing the slow recovery under former President Obama. After the 2008-09 recession, it took the Obama Administration 4 times as long to regain the same share of lost economic output.

"I know the media, including most of the financial media, does not like President Trump, but this is when you have an obligation to share this news . . . It points to the American spirit, our resolve, the ability to come back!" 🇺🇸 pic.twitter.com/2yfD9I1VtU

Today, the left wants to emulate Europe, issue endless lockdowns, and use the pandemic as an excuse to grow government control of the economy and society. President Trump wants to keep working with the private sector, protect the most vulnerable among us, and safely reopen our economy and schools.

The Great American Comeback is well underway—a testament to both President Trump’s policies and the strength and resilience of America’s workers and families.

After releasing his plan to reopen America safely in April, President Trump remarked that prior to the Coronavirus pandemic, the United States had “built the greatest economy anywhere in the world . . .  and we’re going to build it again.”

At that time, the consensus among economic forecasters was that pandemic-induced lockdowns would result in a sharp economic contraction in the second quarter, and that the economy would experience tepid growth in the third quarter as it slowly clawed back pandemic losses. But because of the President’s pro-growth policies that set a strong pre-pandemic foundation—and the extraordinary speed and scale of the Administration’s support for America’s families and businesses—our nation’s recovery continues to exceed expectations.

This morning’s release of U.S. GDP for the third quarter of 2020 from the Bureau of Economic Analysis (BEA) affirms President Trump’s statement that “we’re coming back, and we’re coming back strong.”

The BEA estimates that real GDP grew 7.4 percent (33.1 percent at an annual rate) in the third quarter, the largest single quarter of economic growth on record and roughly twice the prior record of 3.9 percent (16.7 percent at an annual rate) set in the first quarter of 1950. This growth follows the most severe pandemic-induced contraction on record in the second quarter of 2020, which occurred as the government mandatorily shut down all but nonessential services, and Americans made sacrifices to slow the pandemic.

With the historic third-quarter growth, the United States in a single quarter has now recovered two-thirds of the economic output lost due to the pandemic during the first half of the year (Figure 1). In the recovery from the 2008-09 recession, it took 4 times as long to regain the same share of lost economic output. 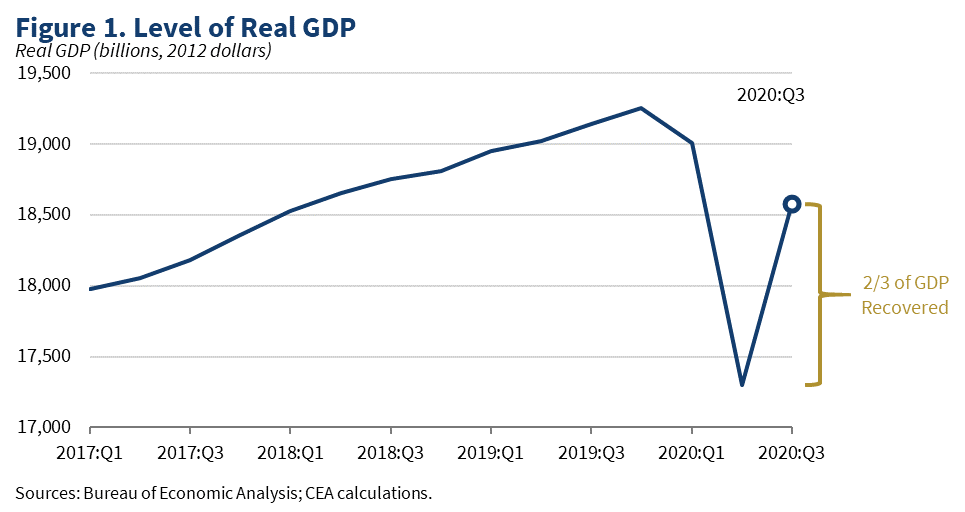 After data confirmed the recovery was well underway beginning in May, the nonpartisan Congressional Budget Office (CBO) in July projected a second quarter contraction roughly in line with the actual decline that occurred, though the CBO projected a third quarter growth rate of just 4.0 percent (17.0 percent at an annual rate). The strong footing of the United States economy prior to the pandemic contributed to the stronger-than-expected recovery our country is currently experiencing.

The United States had the highest GDP growth rate among the G7 countries from 2017 to 2019, with growth more than double the G7 average. While the pandemic hit every major economy around the world, the United States experienced the least severe economic contraction of any major Western economy in the first half of 2020, with the Euro Area economy’s contraction being 1.5 times as severe as the contraction of the U.S. economy.

The growth in the third quarter, and the particular strength of American consumers, also reflects the swiftness and magnitude of the aid the Administration provided directly to America’s families, workers, and small businesses. The $2.7 trillion in stimulus that the CARES Act and other pandemic-related legislation supplied is roughly 13 percent as a share of GDP. That is more than twice the size of the 2009 American Recovery and Reinvestment Act (ARRA) as a share of GDP.

This direct aid supported Americans’ income through the pandemic. Total personal income rose above, and still remains above, pre-pandemic levels. Personal income excluding the government transfers provided for in the CARES Act, however, decreased from pre-pandemic levels (Figure 2). Without this income support, the resurgence in consumer spending would likely not have been as strong. Having added back 11.4 million jobs since April with more than 5 in 10 jobs lost in the pandemic recovered, total wages and salaries increased 5 percent in the third quarter and are now just 1.4 percent below pre-pandemic level. 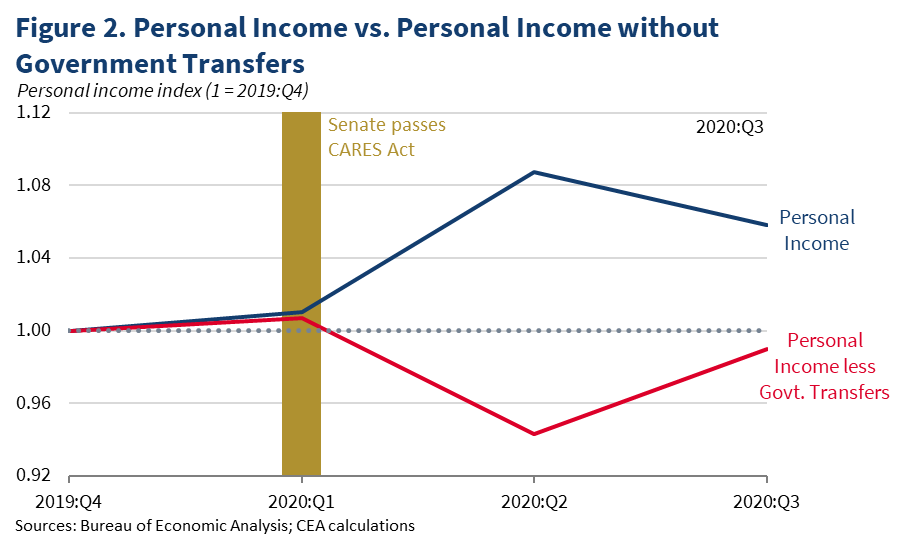 The strong foundation of the pre-pandemic economy and the efficacy of the Trump Administration’s efforts to provide direct economic aid to families and small businesses helped deliver record-setting growth that few predicted would occur earlier this year. Our nation’s economy is poised for continued expansion in the fourth quarter, and the strength of the recovery thus far is a testament to the fortitude and resilience of America’s workers and families. 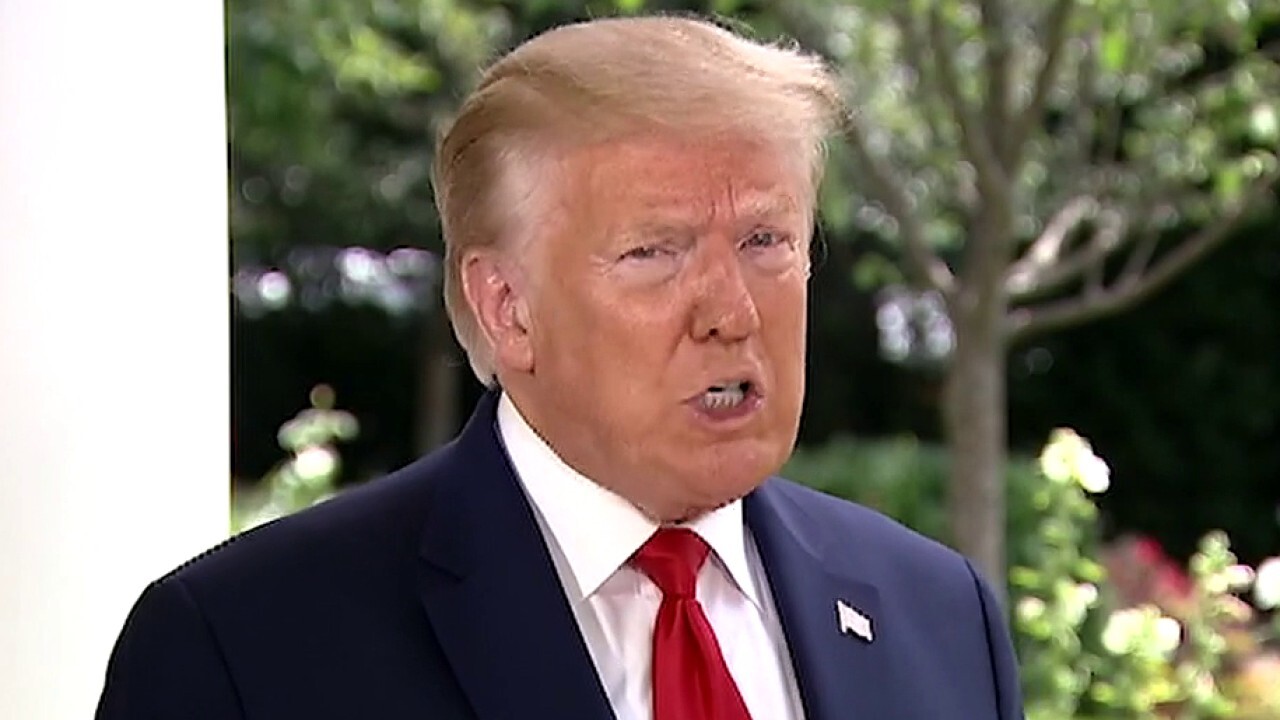