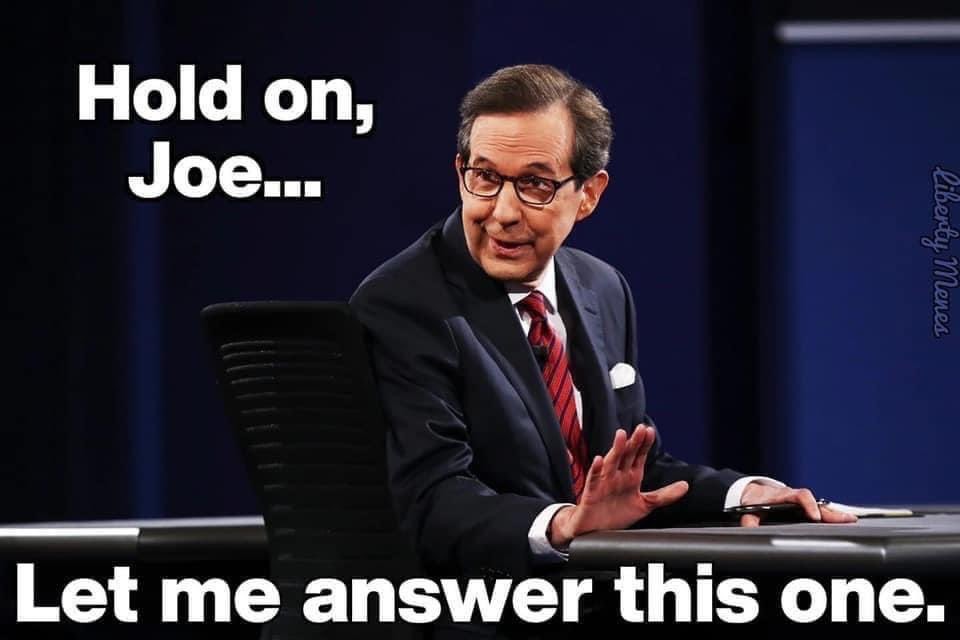 President Trump to Chris Wallace: "First of all, I guess I’m debating you, not him. But that's okay. I'm not surprised."

In this interview Chris Wallace claimed the President was the first to interrupt. That is definitively false, just like his comments about Critical Race Theory and about Kenosha. https://t.co/8omibbEMzR pic.twitter.com/DaKEpNItjI

Donald Trump was not elected to be “nice” or “polite” to the enemies of the American people.

.@AriFleischer is 100% correct about the debate. Here's a video of the first three interruptions, and they're all Biden interrupting Trump: pic.twitter.com/f9b1zyQQZM

Isaac in Pennsylvania: "I'm an African American male and I voted Democrat all my life... I realized that Democrats are not really for the people, they are for themselves.... Trump is really stepping up and putting pressure on" China. pic.twitter.com/4cSwI9cvbO

If you still can't figure out why the American public doesn't trust the media... just rewatch Chris Wallace's performance tonight...

It's literal insanity watching the lamestream media pretend there are no issues with universal vote by mail.

Ballots are being thrown away

The American people know the media is lying!

Here are the top five must-watch moments from tonight’s debate:

"Joe Biden was in some kind of foul, putrid mode at the debate last night.

"Many people have cited memorable lines from the contentious political slugfest, but the lines that stand out to me are the grotesquely disrespectful ad hominem insults Biden directed at the president of the United States.

"The Rev.com transcript shows tons of them:

" "You're the worst president America has ever had."

"What kind of argument for 'civility' and 'decency' and 'dignity,' -- all words Biden uses ad nauseum, is that? Some kind of bottom has dropped out. Some of these insults were so disgusting they actually made viewers feel sorry for President Trump, which is frankly a feat.

"Trump can give as good as he gets, but he made no such ad hominems comparable to those, there was one part of the debate where he called Biden 'not smart,' but at least he had some academic records to back it up with. In fact, in all of his oppositional statements to Biden, he had some kind of fact, he wasn't just pulling disembodied insults out as Biden did. Biden had no such backing for his insults, some of the most disgusting words hurled at a president of the United States to his face ever heard. Our worst enemies talk like that - think Nicolas Maduro, Iran's mullahs, or Kim Jong Un, pre-peace talks.

"Which ultimately amounts to insults to the voters. Trump represents us and most of us (I'm not talking about California's illegals who created the popular vote majority) voted for him, so to hear those insults amounts to insults directed at us, too. Normal candidate sell themselves to voters as something better than their opponent, trying to persuade us, but Biden wasn't interested in persuading. Far from being Mr. Decency, Biden sounded like the collective demon voice of the deep state, screaming its obscenities at exorcist Trump and the voters who brought him in

"Which is about par, because Biden insulted a lot of little guys out in the campaign trail, calling them names like 'damned liar,' 'hey, fat,' and 'you're full of sh**.' And of course, years back, he was the author of the kinds of uncivil hearings now taking place over the Supreme Court, introducing the U.S, to the 'Borking' of candidates. That's led him to where he is now. flinging his disgusting insults straight to President Trump.

"Whatever that makes Biden, what's gone now is the notion that he's a decent guy, a civil guy, a dignity-bringer, which is what his campaign has promoted him as. Many voters, as Thomas Lifson observed to me this morning, dislike Trump because they consider him crude and uncouth. Biden played Mr. Decency to that. But now that act is over. He's shown himself to be even more uncouth than President Trump -- a nasty, insulting, little-guy-hating, dignity-of-office-disrespecting screamer, who can't even back his insults up with facts. He loses the 'dignity-decency-civility' advantage with some voters right there. Those voters can now decide if they want a crude guy with a good governing record, or a crude guy without a good governing record, who spews insults at both them and the office, just because."

AMERICAN THINKER: The debate? Trump was great, Chris Wallace was a dreadful disgrace

"Wallace's performance was as Biden's protector, his advocate, and that is undeniable.  He stepped in at every moment Biden seemed lost: court-packing, lack of support of law enforcement, and Hunter's criminality.
"The debate was so poorly managed.  The questions were designed to aid Biden, to coddle him.  No wonder Trump felt duty-bound to interrupt.  Trump was debating both Wallace and Biden, and only one of them is sentient.
"Wallace's intent was clear: sabotage Trump.  Wallace succeeded only in looking like the stooge he is.
"Why a two-minute rule?  That hardly gives either man time to rebut what was just said about him.  Wallace even brought up the Charlottesville charge but did not admit that it was a manufactured lie without giving Trump the time to deny the lie.
"Wallace completely ignored and tried to derail Trump's bringing up Hunter Biden's criminal corruption.  Why was that not a viable subject for discussion?  Biden lied when he said Hunter had been cleared.  Not so.  Biden has a long history of lying and financial corruption.  Should that fact not be up for review for a candidate for president?  If Biden were a Republican, you can bet it would.
"Wallace should be fired for his wholesale lack of objectivity.  He's become a cut-rate Dan Rather.
"Trump made important points, all of which Wallace tried to mitigate: voter fraud is real and is being perpetrated by Democrats throughout the country.
"Biden tried to insist that the violence being visited upon Democrat-run cities across the nation was by white supremacist groups, a total lie that Wallace let stand.
"Biden is looking forward to shutting down the economy for COVID and implementing a mask mandate.
"Biden is not supported by law enforcement anywhere in the country for obvious reasons, and Obamacare was and remains a disaster.
"Wallace, a member in good standing of the mainstream media, is a handmaiden of the Democrat party in which winning by any means necessary is the rule.  Wallace's bias for Biden was appalling.
"Climate change!  Who on Earth at this moment in time thinks this is an important topic for discussion?  No one but the moonbat Greta Thunbergs of the climatistas.  No one.  Biden's Green New Deal would put millions of Americans who work in the fuel industry out of work.  The left's embrace of this nonsense has left California with rolling blackouts.  Wallace did not question Biden's lack of understanding of the impact his green new deal would have on the economy.  Wallace was for Biden, not America.
"Why no questions on school choice?  On the border and illegal immigration, which Biden supports?  On the necessity of ending the lockdowns that have caused much more death and destruction than COVID?  On Biden saying, "I am the Democratic Party right now"?  On his family's mysteriously ill gotten wealth in the multi-millions?  Wallace was not going to let any of those issues come to the fore.
"He is a naked partisan who is invested only in his own illegitimate primacy as a member of the army of the left in good standing; that would be the swamp, the Deep State.  Wallace perpetrated the Charlottesville lie, and he knows very well that it is a lie.  Trump had to interrupt to get a word in edgewise in his own defense.  Again, Wallace was a despicably partisan moderator.  He tried to throw the debate to Biden and so made Trump the clear winner.  Trump had to fight the only way open to him, by interrupting the two people wrangling to sabotage him.  Wallace's transparent protective bias was appalling.
"All of this makes us wonder: is there a moderator that can legitimately host a debate?  Yes.  Hugh Hewitt comes to mind.  Larry Arnn of Hillsdale, a constitutional scholar, would ask the right questions in a civil manner.  There are numerous brilliant people who could and would conduct a legitimate debate, but Chris Wallace proved himself not among them.  He has shamed himself and Fox News.  His attempt at being a bulwark in Biden's defense was shameless.
"It was Wallace who made the debate something of a farce; he left Trump no path but to try to refute the lies in his questions and Biden's responses.  I am guessing that Chris Wallace is now dead to vast numbers of conservatives who once upon a time respected him.  After this debate, they respect him no more."
Patricia McCarthy - American Thinker

The debate? Trump was great, Chris Wallace was a dreadful disgrace

The debate? Trump was great, Chris Wallace was a dreadful disgrace