America is holding a Royal Flush that spells TRUMP 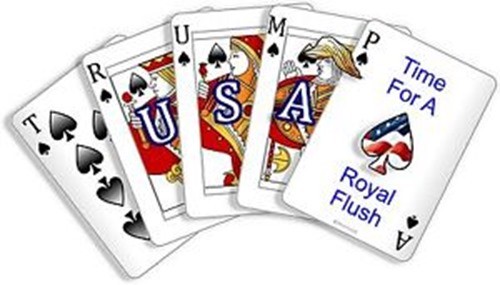 Trump is America's Royal Flush in this highest-of-stakes game of global poker.

The odds make it impossible for the holder of that hand to be outplayed, or even played to a tie. The Royal Flush is the winning hand that you hold very stoically for the benefit of your opponents you want to make their best bet, to either fold or stake it all on the hands they hold of a stature they think is greater than it really is.

In this case, the hand got built patiently and miraculously through the highest possible number of dealer rounds, which gave opponents further invite to go all in. Yes, the opponents are all in.

This Royal Flush was supplied by the Master Dealer, in His Timing, according to His Perfect Will.

Who, exactly, deceived who?

The American electorate voted for Trump in such high numbers that they broke the algorithm developed by fraudsters in their voting machines to falsely give Biden a narrow victory. In the face of these overwhelming numbers, to successfully steal the election, Biden's camp was forced to use last-minute, obviously fraudulent means such as ballot harvesting, ballot stuffing and destroying Trump ballots, among so many other things they got caught doing.

Their lack of preparation for Trump's huge popularity made it easy to catch them in the act. (You would think they did this on purpose, they were so intent on denying this obvious fact of Trump's massive popularity.)

Just because the lying, gaslighting Mockingbird Media tries to convince us this didn't happen doesn't make it so.

That's a Royal Flush in poker, the DNCCP is caught "dead to rights" with their entire lot cast in.

What will be amazing to many people who haven't followed the development of this drama for years, is how globally organized this criminal and treasonous behavior really is, implicating a very high level of power elite conspirators that had, in plain view, planned on China becoming the world power among nations by destroying America that stands in the way of their Hegemonic, Technocratic, Neo-Feudal, Communist/Satanic World Government.

It makes a lot more sense when you know your Bible, we are truly in apocalyptic times. Critical thinking is required, not something most people who drank the kool-aid of a typical public education would know how to do. So, those who can, must hold the hands of those who can't think clearly here.

Who exactly deceived who? Well, it's pretty clear that the enemy was trapped doing what they thought they could get away with because they've always gotten away with it. It is the Trump Team doing the fooling. And they do it very well.

More to come when the perps get trotted out on national television to make their confessions and by so doing avoid capital punishment for treason. Instead, each traitor's confession will buy that snake a tiny cell to live in, in some remote corner of the world away from civilization for the rest of their miserable wicked life.