5-PART EXPOSE: THE TRUTH ABOUT THE COVID-19 TEST & VACCINE
General
14 likes
Like Page 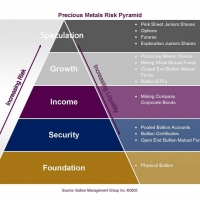 Join
Timeline
About
Members
Albums
Videos
Audio
Events
More
Details
The US central bank tasked it's Risk Mgr, John Exter, to predict what would happen in a Cri$i$ of Confidence. The resul...
The US central bank tasked it's Risk Mgr, John Exter, to predict what would happen in a Cri$i$ of Confidence. The result is Exter's Inverted Ri$k-Off Pyramid of a$$et$ cascading down into Gold & Silver Bullion. Most people are now unaware that "CURRENCY" & "MONEY" are two different things - Mike Maloney explains the difference in the first of his "Hidden Secrets of Money" video series. JP Morgan famously said, "Gold is Money. Everything else is Credit." Only Bullion has been Real Money for 6,000 years, explaining why it is where Risk-Off a$$et$ go in a crisis.
. . . Bullion is the best medium for Saving due to the problem of an ever-expanding currency supply. Never Sell Bullion because it is your family's wealth legacy. Store some bullion where you can get a loan using it as collateral & HOLD your bu while it goes up in value over the time it takes to re-pay. The Federal Reserve Note (FRN) has lost 99% of it's 1913 Purchasing Power since the Fed Bank started - most of the loss has been since 1971 when the FRN was taken off the Gold Standard. Only a single cent remains. When priced in $Gold, the DOW remains (50%) below 31 Dec 1999, 20 years ago, proving that stock Gain$ are a delu$ion. Even long-time gold nay-sayer Warren Buffet finally figured this out recently, sold his banks & bought Gold miners - because bullion beat Buffett handily since 1999. The constant Expansion of their Currency Supply by the Central Banks of the world is the Fundamental cause for Inflation & rising prices, whether stocks or Gold or groceries. The US Fed bank has increased the M2 Currency Supply 6x since Sept 2019, which is the Fundamental driver for higher gold prices as even higher Inflation, perhaps HYPER-Inflation takes hold. Bad News, war, etc causing gold to spike in price are all merely Technical blips that will correct, but the Fundamental driver of the expanded currency supply will prevent gold from dropping significantly in price.
. . . Nick Barisheff, CEO of Bullion Management Group (BMG) in Canada has developed the PM Pyramid Financial Plan, an adaptation of the Classic Risk Pyramid exclusively to Precious Metals (PM) for surviving "The Big Currency Re-$et" after the last 1913 cent of the FRN is gone & it becomes worthless. The PM Pyramid is the concrete application of Exter's Inverted Risk-Off Pyramid, providing an "Arc" of Safety to keep your family afloat during the "Flood" of market, economic, & perhaps societal unrest to come. The pyramid shape is suggestive of the best Asset Allocation$ at each level. The Foundation & Base are Gold & Silver because bullion has zero 3rd party Risk. Income is from Bonds, but only of PM producers (No corporate bonds or US Treasuries, the biggest of all bubbles). Income also from the Dividends of PM producers. The first level for PM stocks focuses on the Royalty-Streamers using a non-bank miner-financing method invented by Pierre LaSonde of Franco-Nevada (FNV). Major SILVER producers are next because most get nearly HALF their Rev$ from Gold, so that one has exposure to both Au & Ag with silver majors. Owning "gold-only" miners with costs much higher than the Streamers is redundant & not effective unless they are severely under-valued. But the PM pyramid is not "Value" investing in under-performers. The SAFETY of the bulk at lower risk levels allows one to be MORE aggressive at the higher levels. . . . . It's important to realize that the PM pyramid accommodates many investing styles & time horizons employing various different trading & investment styles, from Day Trading Gap Opens, to Holding Forever the best Streamers.
. . . Mid-tier & junior producers are nearer the top with more risk. Hold only those that have De-Risked their deposits with a PEA or Preliminary Feasibility Study (PFS). Avoid holding Explorers who produce nothing but more stock shares from dilutive "Offerings" except as Swing Trades during news cycles. OPTIONS, Warrants, & CRYPTOS are the highest risk @ the very Top for Swing Trading only. One may prudently speculate with these riskier things only with a SMALL percentage of one's Liquid Net Worth, since the vast majority is safely invested.
. . . Rough Goal for asset allocation: You wanna end up with about 25% in bullion, 25% in the Royalty-Streamers, & 25% in the major producers. 15% in small cap PMs, leaving 10% for prudent speculation in swing trading the riskiest things. The whole point of the PM Pyramid is RISK MITIGATION! If the bulk of your assets are not SAFELY invested, then you are NOT following "The Plan." Gains from Trades buy more bullion to expand the base & more shares of the Streamers.
. . . The most important Fundamental factors in PM stock selection are Production Costs, the biggest factor in Net Margin, or Profit, & "B.O.P.S" or Bullion Ounces Per Share, figured by adding P&P Reserves + M&I Resources (excluding "Inferred" amounts), divided by the Total Outstanding Shares (OS), Fully Diluted. Additional shares from Bought Deal Financings reduces BOPS. Exploration & increases in Resource amounts raise BOPS. BOPS is the key in stock selection & bears checking periodically. Bu Oz per SHARE can be further divided by the stock price to get Bu per DOLLAR (sic: FRN) to arrive @ BOP$ for the best comparison of Fundamental Value. I focus on the best individual PM stocks which are the ones carrying the other dogs in PM Funds like GDX or SIL. Wait for an excellent technical set-up before entering any short-term trade. Buying a Call Option rather then the stock itself maximizes Up$ide Gain$ for more bullion.
More
Members