LIGHTS OUT!! Every Night at the White House at 2300: TO THE SECOND!

We have some ideas but we rightfully can't say we know EXACTLY what Trump's doing every day in the REAL PRESIDENCY, while the world continues to make the unreal, real, with breathless jabber about a Castle Rock / Amazon Studios Presidency - the Truman-Biden Show. We do know that The Team like to send some winks our way, like this lights-on-a-timer trick at the White House! You gotta admit, THAT is pretty funny! 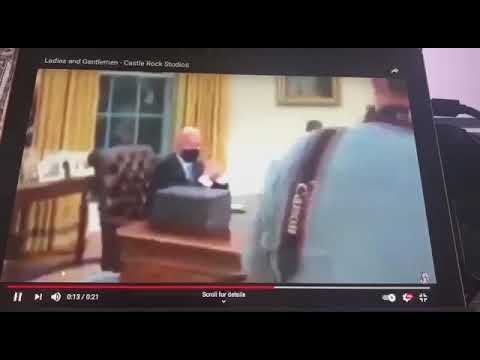 I just saw a cool video on Youtube that I haven't seen posted here. I did a quick Google search of "Amazon Studios" and found this website "Amazon …
https://www.reddit.com/r/conspiracy/comments/lc6rz7/castle_rock_studios_aka_amazon_studios/?utm_source=share&utm_medium=web2x&context=3

The question continues to puzzle, why the U.S. Democrat Party would choose Joe Biden as their front-man, easily the worst political candidate for high office in modern history, with his running-mate Kamala Harris at least as bad as their previous top-worst Hillary Clinton.

At least Zero, Hussein had curb appeal, a nice Hopy, Changey facade. They painted the exterior and replaced all the broken windows before they sold us the Crack House. And why the DNC Geriatric Parade!? A political party that has entirely subverted our education system from top to bottom with STD-infested socialistic fascism, enjoying perhaps as high as 90% support from young, thoroughly brainwashed Americans on college campuses nationwide--can't come up with operatives for their top political jobs who don't "Beto" us into blowing coffee, or exhibit signs of senility? "C'mon Man!" Nonstop Drunk on the Job Nancy Pelosi? Mad Maxine Waters, Chuck Schumer, "Pocahontas" Warren, Bert & Ernie Sanders!?

With John Kerry, Hillary and Free Willy Clinton and "Michelle" Obama, lurking in the wings, all eager to offer us something this time around they somehow didn't manage to pull off in all the decades we've been paying them.