First Lady Melania Trump, escorted by her fine husband, was honored to receive the prestigious Spirit of Lincoln Award Friday night, November 6, 2021. The Spirit of Lincoln award is given to those who embrace "enhancing personal freedom, encouraging individual responsibility, and ensuring equality under the law for all Americans," and Melania Trump is the embodiment of all those qualities. First Lady Melania Trump has lent her tender heart and firm views about equality to all groups embracing equal rights for mankind.

A core initiative began by the First Lady was "BE BEST", focusing on equal opportunity for all children by creating Three Pillars of help regarding health issues, internet safety and drug use.

The 'Spirit of Lincoln Award' is presented by the Log Cabin Republicans:

"The nation's original and largest organization representing LGBT conservatives and straight allies who support fairness, freedom, and equality for all Americans."

Log Cabin Republicans have a unifying message and mission:

"Log Cabin Republicans are LGBT Republicans and straight allies who support equality under the law for all, free markets, individual liberty, limited government, and a strong national defense."

They have core values that include embracing national pride and greatness. They believe "equality for LGBT Americans is in the finest tradition of the Republican Party. We educate our Party about why inclusion wins. Opposing LGBT equality is inconsistent with the GOP's core principles of smaller government and personal freedom."

The video-tweet below was chosen by Log Cabin Republicans to exemplify why they chose First Lady Melania to receive the Spirit of Lincoln Award:

She is an ally for equality.

In this exclusive video, the First Lady gets unapologetically outspoken. pic.twitter.com/kc8UFDqaOB

"During and after her time in office, First Lady Melania Trump has proven time and again her leadership on those principles. Her BE BEST initiative focused on those most vulnerable among us – children – by encouraging them to be their best, drawing attention to young Americans social and emotional health, issues that LGBT Americans of all stripes empathize with. Moreover, in the heat of the presidential election last year, the First Lady passionately reiterated her husband's commitment to LGBT Americans, supported diversity of thought, and made clear that we are welcome members of the Republican Party, a historic moment not just for LGBT conservatives but for the history of the GOP.

Melania Trump's acceptance to be the guest of honor at the Spirit of Lincoln Gala even after she has left the White House only reaffirms her unwavering support for the LGBT community."  LogCabinRepublicans

As a yearly event, the Spirit of Lincoln Award Gala is traditionally held in Washington D.C, but this year it was held in a more hospitable venue: historic Mar-A-Lago in Palm Beach, Florida.

There was nothing ordinary or traditional about this event as First Lady Melania Trump and her fabulously famous escort entered the ballroom to a round of applause, loud cheers and glad tidings. First Lady Melania was of course beautifully attired in a fitted feathery-adorned black gown, her hair modestly up-swept and her regal presence just as stunning as ever:

#NEW Wow, she is BEAUTIFUL! ✨🤍 Melania and Donald arriving at the “Spirit of Lincoln” ceremony tonight! 🤍 @MELANIATRUMP We all love you Melania and congratulations on receiving this award, you deserve it! 🤍 #MELANIATRUMP #Trump pic.twitter.com/AB5c14s3Mw

#NEW Melania Trump at Maralago this evening, she will be accepting the Spirit of Lincoln Award! 🤍@LogCabinGOP

In a respectful and sincere twitter presentation, LGBT conservatives congratulate the First Lady, voicing their heartfelt opinions, describing how they view her heroic efforts to expand equality toward their community:

Last night, Log Cabin Republicans presented First Lady @MELANIATRUMP with our annual Spirit of Lincoln Award at Mar-a-Lago for her dedication to our principles.

Watch LGBT conservatives explain why the First Lady is a champion and inspiration to our community.

Let us not ignore another award given at this event which is quite unique and spectacular.

Ric Grenell, the first openly gay person to serve in a presidential cabinet, was chosen by President Trump because of his dedication, hard wok and integrity, not because of his 'pronoun'.

Newsmax reports, "Ric Grenell remembers listening to a speaker at the Republican National Committee in Houston in 1992 and being told that gay people were not welcome in the Republican Party. Almost 30 years later he became the first openly gay person to serve in a presidential Cabinet when he became acting director of national intelligence in 2020. Grenell accepted the "Game Changer" award Saturday at the Log Cabin Republicans', a group that represents LGBT conservatives and straight allies, "Spirit of Lincoln" gala."
THANK YOU, FIRST LADY MELANIA TRUMP. YOUR INTEGRITY, SINCERITY AND COMPASSIONATE HEART HAVE LEFT AN ETERNAL MARK ON THE HEARTS OF ALL MANKIND. WE ARE INDEBTED TO YOUR OUTSTANDING EXAMPLE AS A LEADER SHOWING US HOW TO GENTLY ENABLE EQUAL RIGHTS FOR ALL, USING WISDOM AND LOVE. 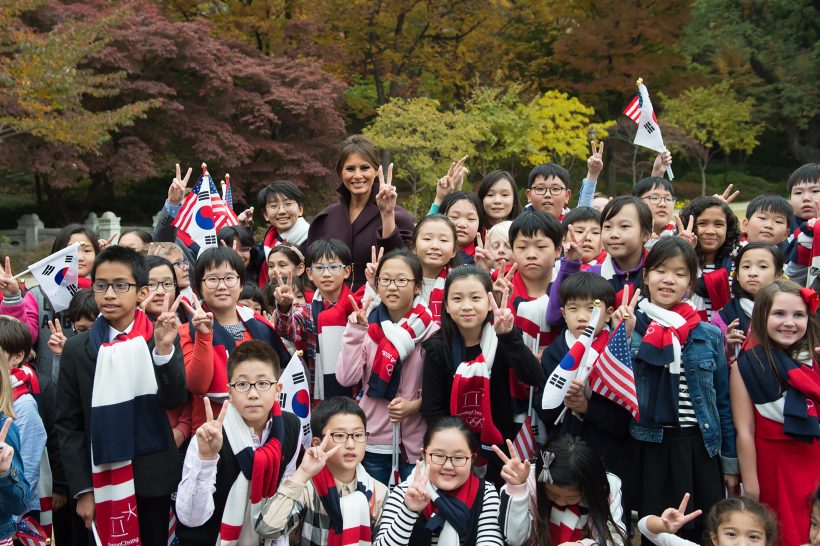 BE BEST – The White House

Lean more about BE BEST:

The mission of BE BEST is to focus on some of the major issues facing children today, with the goal of encouraging children to BE BEST in their individual paths, while also teaching them the importance of social, emotional, and physical health. BE BEST will concentrate on three main pillars: well-being, online safety, and opioid abuse. description here...

The United States 45th President, Donald J. Trump's First Family - American Family Values President Donald J. Trump and First Lady Melania Trump, along with the Trump children, demonstrate family unity in their personal as well as their professional lives. Daughter Ivanka works by her father's side in the official capacity of Presidential Advisor. President Trump's two adult sons, Donald Trump Jr. and Eric Trump, co-manage the family business, The Trump Organization. His youngest daughter, Tiffany Trump, recently graduated from Georgetown University Law Center with a law degree. Barron Trump is in his adolescent years, occupied with his education and being a teenager.

MyRR Arsenal: A mighty tide has begun, people are coming to RRM for many reasons, including a censorship-free safe haven for their content--and best of all, it's free! In addition to enjoying some of the best news and commentary on the internet, membership in our patriot community is growing rapidly. Free Membership gives you access to your MyRR Timeline, Pages and Groups. Simply posting content here exactly like you would on FB and Twitt, secures it from censorship.