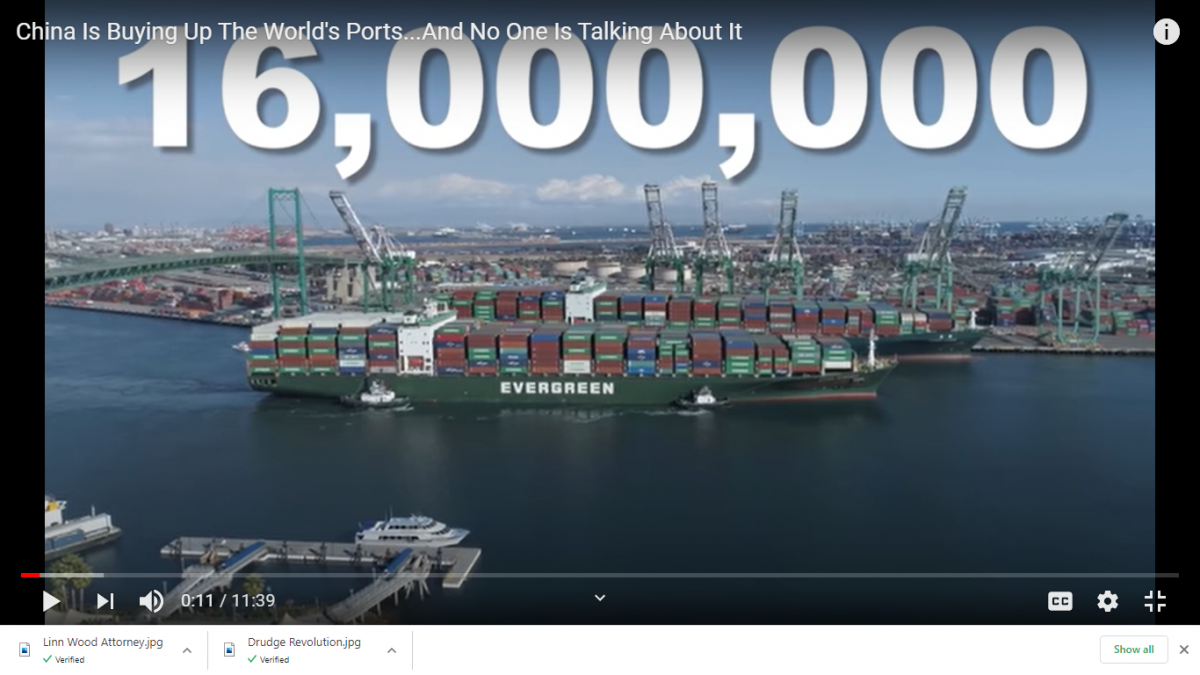 China's buying up the world's ports....and no-one is talking about it.

"This is the port of Long Beach California. It is the second largest Port in North America, Ahead of the 3rd largest Port of New York, and Behind the largest Port which is the port of los angeles. Roughly 16 million Tons of Cargo pass through this port each year and makes its way to warehouses, factories, and homes, within the United States. This single port which is just 13 square kilometres, is responsible for well over $100 Billion dollars worth of trade and employs over 340 000 people in Southern California.

"So, it is quite apparent that this port is one of the most vital parts of southern california’s economy. Yet..it is not owned by The town of long beach...California...or even the united states. You see, in late 1980’s, The port of long beach was sold to a company called Orient Overseas International Limited, which was a company that was based out of hong kong. And at the time, Hong Kong was a British colony and a close economic partner with the United States, so the United States viewed this sale as a win-win, as The Hong-Kong based company would go on to invest billions of dollars, and expand the port on its own...while hundreds of thousands of jobs in southern california would be created from this investment. And for roughly 3 decades, this was a fairly positive relationship between long beach, and the Hong Kong based company."

"But then...in 2017 something happened that put an end to this positive relationship. In July of 2017, The Chinese State Run Company, Cosco, ended up purchasing a 75 percent stake the the Orient Overseas International Limited, and became the new owner of the Hong Kong based company, and therefore the owner of the Port of Long Beach. Now, even though this probably didn’t make the news because shipping is not exactly the most interesting topic to bring up in the mainstream news...it was important enough for the Federal Government to take action. You see, a state run Chinese company now owned the 3rd most important port in North America...meaning that the Chinese government had control over one of the key trading points and economic hubs of the United States. And for the United States government, that was unacceptable citing national security risks.

"So that is why the government forced COSCO to sell off the port of long beach immediately to a non-Chinese state-run company. And in 2019, Australia’s Macquarie Group ended up buying Port for 1.8 Billion Dollars. So now technically the port of long beach is owned by a private australian company, which is viewed as a much safer owner in the eyes of the U.S government.

"Now if this was just an isolated incident of China trying to buy up an important seaport, than it might be worth ending the video right here. But this is just one of Dozens of cases, where Chinese State run companies have tried buying out the most important ports in the world. For example, in Hambantota, Sri Lanka there is a port that is in a strategic location just below one of China’s Rivals, India. So in 2017, China was able to buy out a controlling share in the port, largely because the government of Sri Lanka was in debt and needed foreign investment to save its economy. In 2015, and 2016, Chinese investors bought out a controlling interest in Port Darwin, and a large share of the port of Melbourne. They control the port of freeport in the Bahamas, just off of the coast of the United States. And in fact, Chinese companies control ports in virtually every major country in the world, and in the countries where they dont, they typically have 49% ownership of some ports in the country...like in belgium, France, and the United States.

"But here is what is what might be the most striking point of this video. All of these ports that are being bought up all over the world by China, have only occurred over the last 10 years. Meaning that China went from having relatively no ownership of any ports before the year 2010, to becoming the largest owner of the worlds ports today. So that brings up the question...why are they doing this, and what are the ramifications of China’s plan? Well they are doing this because of something they have called the belt and road initiative. This was a plan announced by China in the early 2010’s, with the purpose of having a global development and investment strategy."